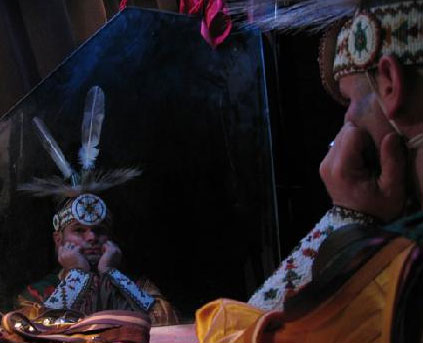 With Walking in Two, Tom Pearson  and Donna Ahmadi set out to address questions of Native identity.  Sidestepping the predictable, they brought a fresh voice to the conversation in three dances.  They made thought provoking statements and raised compelling questions about what it meant to be Indian within the dominant society and on stage.   However, in the broader sense, I felt that the works expanded toward questioning the entire concept of identity.  I can say that because by the end of the performance, I wound up wondering about my own people, and where they stood within the greater society, on stage, in music and in the dance world.

I’d never before seen a theme addressed so thoroughly in the course of one afternoon and I really appreciated the lengths to which the artists had gone.  Those who attended the concert were provided with an interactive art installation, a gallery of  memorabilia from Buffalo Bill’s Wild West Show as well as beautiful still photos of the dancers and their families, and three dance pieces, one of which was briefly previewed on video in the gallery.

The video that I saw in the gallery before the performance began, showed two dancers (Rebekah Morin and Marissa Nielsen-Pincus) in a forest, each one pushing at a deeply rooted tree as if they were trying to topple it.  They pushed and pushed, occasionally striking a pose of resignation (and maybe even acceptance) before they set to work pushing again.

Inside the theater, the two dancers  appeared in Donna Ahmadi’s Scalp Lock. The piece opens with Ahmadi moving  low to the ground, her back to the audience, while a projection of a tree root covers the back wall of the theater.  She is way upstage and as she backs up toward us, her braids begin to grow until they are about eight feet long, and tethered to the two dancers from the forest.  Throughout the piece, Ahmadi struggles against the women, who continue to pull on her braids, attempting to manipulate her and dominate her, with the same dogged determination they used to push at the tree.  At times Ahmadi appears to reach some kind of accord with them; they line up in single file with Ahmadi at the back, the pulling ceases and the movement briefly softens.  But mostly they are waging an escalating battle.  As the battle intensifies, the film takes us back to the forest.   I felt deeply moved by the earthy atmosphere that  it created in the room, and the backdrop that it provided for this conflict.  Toward the end of the dance, Ahmadi is still struggling against the women, clutching on to her own braids with her hands over her belly, and the braids become an umbilical cord that can’t be cut.

The dance titled Walking in Two centers around the theme of the performing Indian.  It’s compelling material because there are Natives who will tell you that their dances are not performances and that their traditional ceremonial outfits are not costumes; that performance and costumes are non-Native constructs.   So the questions are raised about the Natives who performed in the Wild West Show.  Were they complying with the dominant culture or were they sharing their own traditions?

The piece opened with Pearson and Ahmadi dressed in traditional clothing, their backs to the audience, each twirling a hoop overhead.  The twirling goes on for a long time, and I began to wonder if it represented a mechanical performance, as opposed to one that’s an expression of the sacred.  A hoop dance is performed and as it ends, a hoop is tossed in the air and one of two cowgirls also appearing in the piece, shoots her pistol overhead, the imaginary bullet flying through the center of the hoop.

The mood is shattered, the dancers face the audience, and Daft Punk’s Techno Logic comes blaring from the speakers, followed shortly after by Pat Benatar’s Love Is A Battlefield, to which the dancers perform the choreography from the 1980s video.  The Natives entertain questions from those attending the Wild West show.  Traditional music returns and Ahmadi performs a beautiful shawl dance.  As the piece proceeds, the dancers, both Natives and cowgirls, gradually shed layers of their clothing

Without the clothing of performance, they begin to look a little more alike.  A trio comprised of the two Natives and one of the cowgirls, now without their distinctive costumes, begins a canon of movement, sometimes performed in unison.  As the piece ends, Ahmadi is unraveling her braids.

It was an accurate and artistic representation of what happened to Natives and all people who were forced into assimilation.  Little by little, the things that make their culture unique are stripped away.  But identity lives on within the blood memory and will be passed on to future generations.

The entire presentation was so well done.  It left me with many beautiful images and plenty to consider. 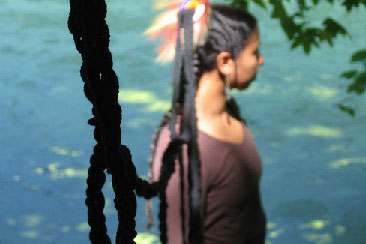 A nice write up of the concert with good photos at Eva Yaa Asantewaa’s Infinite Body blog.