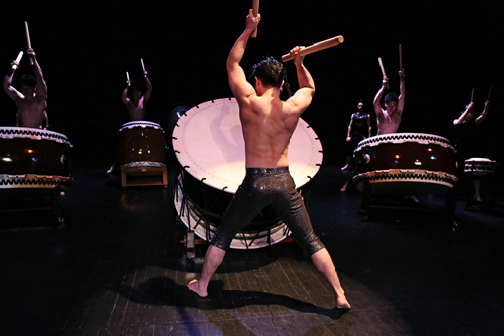 Beginning in the darkness, in an atmosphere of quiet ceremony, then gradually building over the course of the evening into an explosion of power that rocked the opera house, Kodo delivered a sensational performance at BAM on Friday night. At the heart of their show is the ancient and sacred art of the taiko drum of Japan, drums that are used at festivals in prayer to summon the Gods.
.
Steeped in this tradition, Artistic Director Tamasaburo Bando and Kodo’s ensemble of fourteen men and women drum, sing and dance in styles that range from the deeply spiritual, to the hilarious, to the exhilarating. But even as the artists amped up the excitement to the level of a rock concert, they never seemed to stray from their traditional roots.
.
In the program notes, Producer Nobuyuki Nishimura speaks about the challenge of presenting ancient and sacred Japanese folk arts on theatre stages in foreign countries to audiences who are unfamiliar with them. I would imagine that some would argue that it shouldn’t even be attempted. There was one Japanese speaking commentor on BAM’s blog who complained that the presentation was too commercial.
.
But I felt that Kodo managed to communicate beautifully with the American audience without compromising the sanctity of their art. As their energy intensified throughout the course of the evening and brought the audience to their feet, I felt as if the we experienced and respected the sacred within the exhilaration. Even as the complete ensemble displays their precision and virtuosity, they do it while stepping around the stage in a circle, each player humbly backing away as if to offer the spotlight to the person next to them. It seemed to emphasize the unity of the group and an unbroken circle of tradition.
.
Bando’s program notes read like poetry, suggesting that those in the audience embrace the mystery of darkness. Indeed, the concert begins on a darkened stage. Drummers in black costume emerge. A dot of white light hovers over each of their heads and blue light beams from each foot. They remind me of fireflies. Their movement often takes its lead from the rhythm of the drum, and seems to embody the energy of the natural world. I felt as if I was in a dense woodland, catching glimpses in the distance of graceful animals, birds or insects that I’d never seen before. As far as I could tell, all of the instruments were crafted from natural materials and this enhanced the earthy atmosphere of the performance.
.
The physicality of the drumming is seamlessly transformed into choreographed dance. In one sequence, three large drums are stationed around a very large central drum. Three men circle the central drum as they play, shifting their playing from the central drum to the satellite drums, leaping with primal energy into barrel turns as they travel from one drum to the next. The drumsticks become extensions of the hands, creating images of wings or tree branches. In another sequence, a trio of women encounter and appease a trio of hairy masked beings. They tell their story in staccato movements, with emphasis on the arms and hands. They are so lovely, and they draw us into their narrative, making us laugh. Dancers and players sometimes seem to drift from one station in the formation to another, as if they are propelled by the music rather than executing steps. They move without any hint of pretense. There is a beautiful and inspiring humility to their showmanship.
.
The variety of drums used seems limitless. There are drums on the floor, drums strapped to the body, drums held in the hands, drums whose barrels are different lengths and make different sounds, drums with different voices and pitches. They come together with bells, flutes and vocal harmonies which are beautifully layered into the music. At times, there are rapid shifts in dynamics or tempo but all of the movement remains flawlessly synchronized and we are awed by the virtuosity and precision of the players and the dance.
.
The audience cheered wildly throughout the performance. There were standing ovations and a rush of enthusiasm in the crowd as we left the theatre. The performance had been so exciting and so moving that it made me wish I’d brought a host of friends to experience the dazzling beauty along with me.