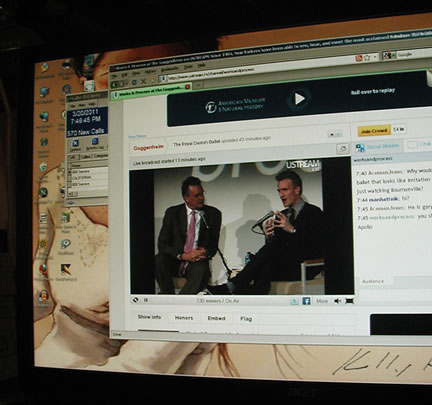 This is my second experience with watching a simulcast provided by the Guggenheim’s Works & Process Series. Not only is the series a wonderful concept, in which an Artistic Director can offer insight into dances moments before they are presented on stage. But having the opportunity to watch the presentation on a video stream while reading the scrolling chat in an adjacent window on my computer screen, and being in the “virtual” company of knowledgeable fans and one of my favorite ballerinas — Ashley Bouder — throughout the evening is the icing on the cake.

In this edition of Works & Process, John Meehan, Professor of Dance at Vassar College, interviewed Nikolaj Hübbe, Artistic Director of the Royal Danish Ballet and former principal dancer of New York City Ballet. RDB presented a program which combined the new — an excerpt from a work by Jorma Elo – with the old, a ballet called Napoli, choreographed in 1842 by August Bournonville. From the 1830s through the 1870’s, Bournonville choreographed over 50 ballets for RDB, creating a unique style that became the company’s signature.

The evening opened with Hübbe speaking about the way that Bournonville structured class. After his death, his students codified his teachings with steps or combinations titled for the days of the week. The first dance of the evening, an excerpt from Bournonville Variations, paid homage to his system. Five men dressed in gray, some wearing jackets which made reference to characters from classic ballets, performed an assortment of these combinations. Most of what we saw was petite and middle allegro work, sometimes performed with unusual port de bras, including one sequence where the men danced with their arms folded across their chests. The sequences moved along lines or on the diagonal, as they would in class. As a ballet student, all I could think of was how challenging all that footwork must have been. It seemed as if it never let up. The men performed it so beautifully, and their footwork was so quick and clean.

During the break, Meehan interviewed Hübbe about his training. Hübbe had it in his mind at an early age that he wanted to be a ballet dancer. His parents originally discouraged him, placing a higher value on his academic education. But by the age of 9 he’d managed to convince them to let him audition at the Royal Ballet School. He said that during his student years in Denmark, male ballet dancers were considered to be “men of craft”, on par with intellectuals and artists, and that there was no stigma involved in being a dancer. 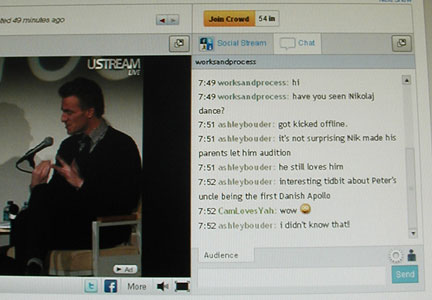 Before I heard this interview, I never realized that Balanchine had served as Artistic Director of the RDB right after he left the Ballet Russes. He set Apollo on the RDB, and Peter Martins’ uncle became the first Danish Apollo.

The first piece in the next dance section was an excerpt from Jorma Elo’s Lost on Slow. Then came Bournonville’s Jockey Dance, a tip of the hat to the English love of horse racing. Hübbe described the theme of this ballet as being, “Anything you can do, I can do better.” I was taken by the fleet footedness of the dancers, veteran Thomas Lund and newcomer Alban Lendorf. Ashley Bouder said that one would rarely see footwork like this anywhere else. Even the hips become involved, as the dancers turn in and out at breakneck speed, each one trying to outdo the other. This piece was followed by an excerpt from Bournonville’s A Folktale. The costumes used in all the dances throughout the evening were absolutely beautiful, but the crimson red dresses worn by the ballerinas in A Folktale were just extraordinary. 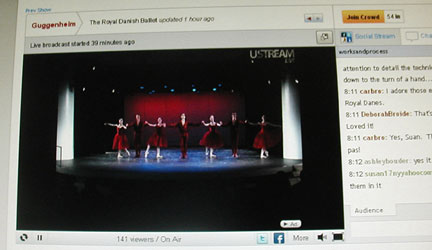 The interview continued with talk of the Royal Danish Ballet itself. The company is 250 years old, and was described as being “notoriously difficult to direct” because of some of the archaic rules involved. In America, private enterprise runs the dance world. But with the Danes, it is all subsidized by the state, and with this come rules that can not be violated. One of the rules requires that dancers have to retire at the age of 40, so freelancers have be hired to play roles like the parents in La Sylphide. The Artistic Director has to maintain the balance in keeping tradition alive while keeping current with the times.

Hübbe also said that, as a young dancer, he wanted to come to America and dance with New York City Ballet because he wanted the opportunity to “step out of the story” and to prove that he could “dance without a liberetto”. So it was amusing that when he came to NYCB, the first ballet in which he was cast was Donizetti Variations, which has a libretto.

The next dance was an excerpt from Bournonville’s La Sylphide. I wish that I could credit the ballerina who played this role, because she was so lovely. Her port des bras especially was so expressive. She really embodied the look and the movement of a fairy from the forest. I would love to see RDB’s full length ballet.

The evening closed with a celebratory tarantella from Act III of Napoli, full of exuberant dancing and lovely colorful costumes.

The Royal Danish Ballet is about to embark on an American tour which will bring them to the Koch Theater at Lincoln Center, among other places. They will not be able to perform the full length La Sylphide here in New York City because the theater doesn’t have a deep back stage area and can’t accommodate the sets. Ashley Bouder added that behind the stage of the Koch Theater, all that they have is a cross over. I had to wonder why Lincoln Kirstein and Philip Johnson would have chosen to have the theater designed this way.

For hours before the performance started, Ashley Bouder was tweeting her reports from the rehearsals. She mentioned that the dancers were concerned that the floor was very slippery. Hübbe, who had been nothing but charming and charismatic and completely natural throughout the entire evening, ended the performance by thanking the dancers and expressing his relief that no one had fallen during the show!

The program is archived here.

ABT – On to Act II – Works & Process at the Guggenheim