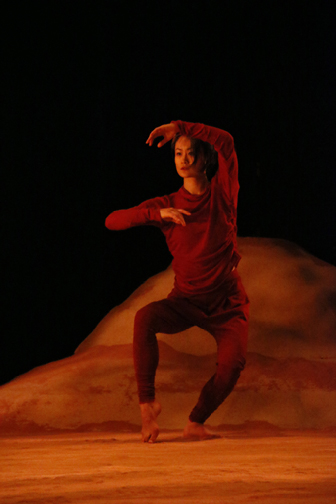 Take Dance
Brynt Beitman, Jill Echo, John Eirich, Kile Hotchkiss, Gina Ianni, Takehiro Ueyama, Marie Zvosec with Guest Artists Orion Duckstein, Nana Tsuda, Miki Orihara and Amy Young
There and Here
Schimmel Center at Pace University
March 27, 2015
Photos by Phyllis McCabe
.
“Life’s beauty becomes the memory chiseled into the body.  As living organisms connected to the ever-evolving universe, we are integrated as a part of the natural environment.  We are but stones, whose movements cause the ripple in the water.”
.
The above is an excerpt from the program note from the show’s playbill.  The note is so thoughtful and so beautifully written that it gave me plenty to consider before the house lights even went down.  Take Dance marks their 10th Anniversary by presenting  There and Here, which explores the process of life and the nature of the afterlife through a series of physical stories, many of which seem abstract while still woven together by an elusive narrative.  We wonder if we’re seeing many aspects of one human’s transition.  Or are we seeing their memories and experiences merge with the earth?

The sets and the lighting are so striking while being so elemental.  They created an atmosphere that felt sacred.  The stage is covered with sand.  There is a small hill tucked in a remote corner, and a few large stones are scattered around the periphery.  Composer and musician Kato Hidecki is stationed at a drum kit and the equivalent of a small electronic sound studio behind a scrim .  He provides an earthy, primal live accompaniment to the dance, a canvas of percussion and electronic sounds that conjure the spirit of the natural world.  There are heartbeats, bird songs, ocean sounds, sounds of the wind, buzzing which reminds me of insects.

The dance opens with the sound of something rumbling deep in the distance.  The stage is dark as a single dancer, dressed in crimson against the sand colored set, lies on her back.  She moves so slowly, in such tiny increments, like evolution itself.  She gradually lifts her head and shoulders.  Her limbs rise in an unaccustomed fashion, till she’s left on her back with her legs reaching toward the sky, looking almost like the limbs of a tree.  This pose is recalled to beautiful effect throughout the evening.

In the opening, and in several other passages throughout the dance, there are no hard edges and very few angles to the forms of the choreography and the movement of the dancers.  Muscles, torsos and limbs appear slack.  Even in difficult balances, grande rondes  and strong contractions, the body never seems rigid or controlled.  The movement and shapes of the work seem to take their cues from the diversity of the natural world rather than from the brain and a set of techniques.  I found this to be very affecting and it set a lovely tone to the piece.

At times, sand rains down from above.  Sand also slips through the hands of the dancers.  It covers them as they roll on the stage, then it catches the light as it scatters to create gorgeous imagery.  This piece also seems to emphasize the community that exists among people and nature.  As one dancer moves along a line made of the stones, each dancer she passes extends a hand to help her balance.  At times the dancers hold hands and seem to move as one being in a chain reaction.

There are the muscular, athletic and daring passages too, with the fast paced and expansive partnering sequences that bear Take’s trademark.  At one point, the women fly across the stage and hurtle themselves into the arms of their partners, which reminds me of the famous sequence in Paul Taylor’s Esplanade.  This is a company of multi-faceted dancers who seem unafraid to take risks.  In recent years I’ve seen them put through their paces in dances that range from the celebratory, to the heartbreaking, to the comical, to the lovely, to the abstract and beyond.  Still, every passage of the choreography of There and Here has its own unique voice, and it seems to reveal a new aspect of the dancers as individuals and of the company as a whole.

The closing moments of this piece are especially moving, as the dancers slowly travel in a circle around the periphery of the stage, each one either carrying a stone or letting the sand slip through their fingers.  There is little uniformity to the movement, yet it works so beautifully as a cohesive whole.