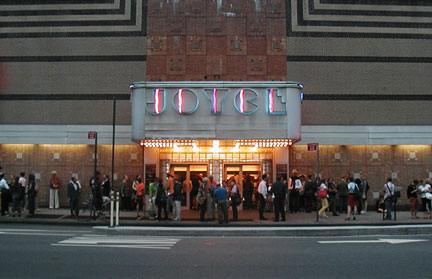 I’d read that the Kate Weare Company was coming to the Joyce this summer.  When I received the video that Weare sent to her mailing list, I knew that I had to see the concert.

The dance she was presenting was called Bright Land, with live accompaniment from The Crooked Jades.  The Crooked Jades play “old time music” of the rural Appalachians, a predecessor to bluegrass [which I didn’t know until I read it in the program].   I am so grateful that, in the video, Weare took the time to talk about her process and her affection for the music, which she expounded upon in the program.

[What great notes there were in the program and on the web site.  So beautifully written.  I love it when an artist takes the time and effort to give the audience some context for her work.]

It’s music with a spiritual bent which doesn’t have much mainstream popularity in this part of the country and it doesn’t show up much on dance stages.  Still, it’s got a distinct sound that conjures images of a specific place and time in American history.  So from the very beginning it gave the dance a flavor that was simultaneously unusual and familiar.  The dance was performed on a bare stage, with the musicians set up upstage right beneath a single light fixture, creating a raw and unpretentious atmosphere.  In the video, Weare spoke about her desire to avoid movement that was cool or beautiful in favor of movement that was intuitive and direct.  I found this to be a really exciting idea which was very well executed in the dance.

﻿﻿﻿Weare’s choreography and her four dancers have a unique and delightfully quirky yet fierce voice; it’s off the beaten path.  The choreography of Bright Land was so powerful, full of sharp staccato movement and strong, almost wild athleticism.  As the piece progressed, each dancer removed layers of his or her costume, often while making direct eye contact with another dancer.  Though their movement was sensuous, there was nothing gratuitous about it.  As the layers of the costumes were shed, the dancers seemed to be drawing us closer to what is raw and what is at the essence of the human experience.

The dancers and musicians took the audience on a journey through a series of songs, each dealing with a different yet universal theme, ending with the musicians coming downstage to perform the rousing Ain’t No Grave Gonna Hold My Body Down.

Wow.  That’s all that I’ve got to say.  The performance was given a standing ovation.  We’d have been happy if it had gone on all night long.

If you get the chance to see this company, do not pass it up.  Visit their very beautiful web site.

Monica Bill Barnes was also on the bill presenting Another Parade, which was hilarious great fun complete with multi colored confetti.

A good night at the theatre.

Cedar Lake at The Joyce

Keigwin + Company’s Exit at the Joyce