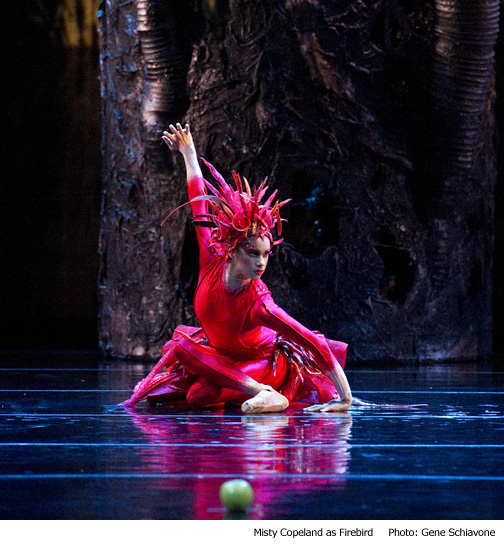 American Ballet Theatre : A Cast of Characters
Works and Process at the Guggenheim
April 30, 2012

Every time that I write about a Works and Process event, I always feel the urge to open the article by gushing about how grateful I am for this series.  For those of us who love American Ballet Theatre and who love the ballet in general, it is wonderful to be shown the details – small and otherwise – that the artists take into consideration as they create the works that touch our hearts.

The evening opened with the Hungarian Czardas from Swan Lake performed by ABT’s Studio Company with Kristi Boone and Roman Zhurbin in the featured roles.  Meehan spoke with Boone and Zhurbin about the makings of a good character dancer.  They emphasized the dancer’s need to be versatile and they stressed the importance of epaulment and port des bras.  Zhurbin said that in character dancing, he tends to move with a different physicality.  His weight is pushed down to the ground, as opposed to being pulled up in the familiar ballet postures.  Boone talked about the difficulties in dancing character roles when she’s also dancing on pointe in another part of the same ballet.  Quick costume changes which include a change from boots to pointe shoes are complicated, as pointe shoes can take a long time to put on, and the feet tend to swell with the change of shoes.

To talk about characterization, Meehan introduced Misty Copeland, who will be dancing the role of Firebird when ABT presents Alexei Ratmansky’s Firebird beginning on June 12th.  It was such a great treat to see Copeland, clad in a red unitard and a luxurious red tail, performing a short dramatic excerpt, full of quick and birdlike footwork, and sailing attitude turns.  The preview made me very excited about seeing the upcoming production.

She said that Ratmansky expressed the entire story in movement and that he didn’t instruct her about how to look.  Isabella Boylston and Natalia Osipova will also be dancing the role, and Copeland said that they give three very different interpretations.  She described Ratmansky as being calm and easy going, even when revising choreography up to the last minute.  She also spoke a bit about the costume, especially about the tail, and the moment of truth when she has to find a feather to pluck and give to Ivan.  This happens on the heels of a grueling pas de deux, and she has exactly half a count of music to find the feather and pluck it.

I was so surprised to learn that Copeland began her ballet training at the age of thirteen, as most ballet dancers start so much earlier.  With only four years of training, she was invited to join ABT’s Studio Company.  It was interesting to hear her say that she only recently started feeling more comfortable in her technique, because her dancing is just so sensational.

The next speaker was Reid Anderson, Artistic Director of Stuttgart Ballet.  He was so endearing and so refreshingly honest as he spoke about his training and his early career.  He said that within the Royal Ballet School, he felt like the lumberjack from Canada and anything but a purist.  When he was invited to join the Stuttgart Ballet, he was candid with choreographer John Cranko about his insecurities.  He described his body as being difficult — a pack of cigarettes on 2 toothpicks – and Cranko said, “That’s what I like about you.”  Anderson, who described the 1969 company as a group of misfits, was told by Cranko that many can do the steps, but very few can dance.

Anderson told a story about Cranko, who when working with Marcia Haydée  said that he did not want her to be coached – he wanted her to go on instinct.  He preferred natural acting over stylized ballet gestures.  He wanted the audience to be able to understand the entire ballet even if they hadn’t had time to read the program.  Under Cranko’s direction, Anderson and the dancers learned to be theatrical.

It was fascinating to learn about the detail that goes into characterizations.  We watched Cory Stearns in the role of Onegin, dancing the Book Pas de Deux with Hee Seo, as Anderson explained the importance of Onegin’s focus.  When his gaze is focused upward, it’s to show that he’s thinking about what was, or what could be.  When his gaze is cast downward, he’s thinking about what’s happening in the moment.  He shows the audience that he’s unimpressed with Tatiana’s book, but his back is to her so that she can’t see how he feels.  He lifts her, but looks away as he lowers her, to show us that he’s putting her out of his mind.  I absolutely loved Anderson’s description of Onegin’s “searching arabesques” – even with his privilege and good looks, he’s just not happy and he’s searching for something that he can’t find.  This vocabulary of movement shows us the way that Onegin toys with Tatiana’s affections, but keeps drifting away emotionally and going back inside his own head.

Roman Zhurbin demonstrated a medley of excerpts from a series of five character roles, one right after the other.  It was amazing to see him switch from one character to the next every few minutes.  He talked about the heavy movement and the weight that he uses when playing Lord Capulet, as he demonstrated how he marches toward the audience.  Then he danced Inspector Gavrilych from The Bright Stream, and talked about how he pictured him as being bowlegged “as if he’d just gotten off a horse”.  I am someone who swoons every time that I see any part of ABT’s Swan Lake, so I especially loved his excerpt from Act 4, when Odette struggles to protect Siegfried, and Zhurbin as Von Rothbart reminds Siegfried that he’s already sworn eternal love to Odile.  Even though Zhurbin stood on a bare stage with no costume and no orchestra, that little excerpt really stirred my fondest memories of the dance.  When I see Swan Lake again this year, I’ll have to pay closer attention to Von Rothbart. 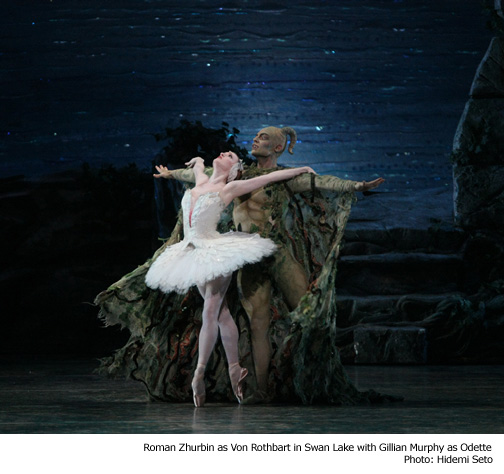 The evening closed with the Danse Russe from Act III of Swan Lake, and talk about Kevin McKenzie’s decision to give Von Rothbart some more dimension by having him flirt with the princesses at the party.  Sascha Radetsky danced Von Rothbart and I was taken by the intimacy of this performance, and the way that it held its own without the stunning sets and lighting or the big orchestra.

Tickets for American Ballet Theatre’s Met Season are on sale now.   I can’t wait for it to begin.