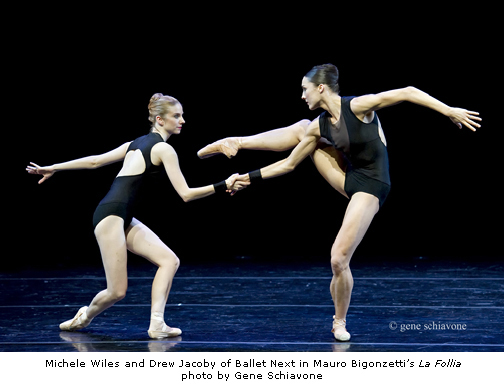 The APAP Showcases at Peridance were nothing short of a beautiful dream which introduced me to several companies whom I’m looking forward to following in the future.

Program A opened with In Dividing, a moody modern piece with earthy sepia tones, presented by the Mettin Movement Collective.  Throughout a series of vignettes, one individual stands apart from the rest of the dancers, who seem to comprise a tribe.  I was surprised to read that choreographer Sarah Mettin is a 2011 graduate of the Conservatory at Purchase.  Her artistic voice and the dancers who make up her company seemed quite mature. I especially liked the beautiful formations and counterpoint of the choreography, and the wonderful assortment of dancers who make up the company.  This is one to watch.

Kate Thomas’s Ballet Neo presented The Appalachian Suites Project, a lovely lyrical contemporary pointe piece which opens with four women dressed in black.  Their movement is expansive, with long extensions and arms that reach.  There was the temptation for me to read things literally and to wonder if these women were mining wives or even widows.  Their movement at times is reserved and the lighting is moody, yet their faces are not pained and their spirits seem very sisterly.  As the dance progresses, two men join the group for a stirring series of partnering sections.  Just beautiful.  Ballet Neo also presented a gorgeous pointe piece called  Measurement and Caution, danced by RJ Johnston and Bethany Lange.  The dance was elegant and full of effusive movement.  There was such strong chemistry between the partners.

Things became light hearted as Nathan Trice Rituals presented Chim Chim Cheree, accompanied live by a jazz trio and danced by four couples.  In this theatrical piece, the women sang skat as they danced.  The dance was a great and organic blend of Broadway and Trice’s signature, often quirky modern style.  So entertaining and very appealing.

Jacoby & Pronk presented two solos.  Prince Credell danced an Alonzo King piece titled Door, to ancient shofar sounds and Hebrew chants.  I loved the primal feel conjured by the raw honesty and muscularity of the movement, the ancient music and the earthy costume.  Drew Jacoby delivered an electrifying performance of Emery LeCrone’s contemporary ballet Aria.  Jacoby has such an enormous presence on the floor and always manages to seamlessly blend fierce feminine strength with deep emotion and ballerina grace.

I was especially moved by Tomoko Imanaka’s Okuni performed by Tomoko Dance Art Company, a piece that seems steeped in traditional Japanese forms.  The women make their entrance dressed in the black and white outfits and straw hats that we’ve seen in artwork of Japanese rice paddy farmers.  Much of the dance travels in a circle.  Much of it is performed in unison with a ritualistic feel.  A woman in a gorgeous colorful silk kimono joins them.  I think that she is Okuni, a temple dancer who founded Kabuki art forms.  As the dancers shed their hats and white vests, they remain dressed in black as they perform a magnificent dance with the very colorful and glamourous  Okuni at the center, mixing modern forms with traditional Japanese images. 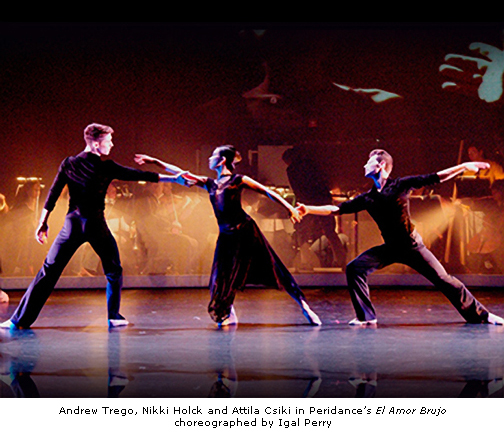 Peridance Contemporary Dance Company performed an excerpt from Igal Perry’s El Amor Brujo, an elegant and dramatic piece which seems to explore the unseen forces that play with romance.  At one point, a man and woman sit opposite each other and tentatively rise and move toward one another.  They hesitate at first and never quite make it.  When the four women and four men of the piece do dance together, they continually change partners.  A pas de deux becomes a pas de trois.  At one point one partner seems drawn away by a magnet or blown away by the wind.  I really liked Perry’s unique take on this theme and I’m looking forward to seeing the full length piece later this month. 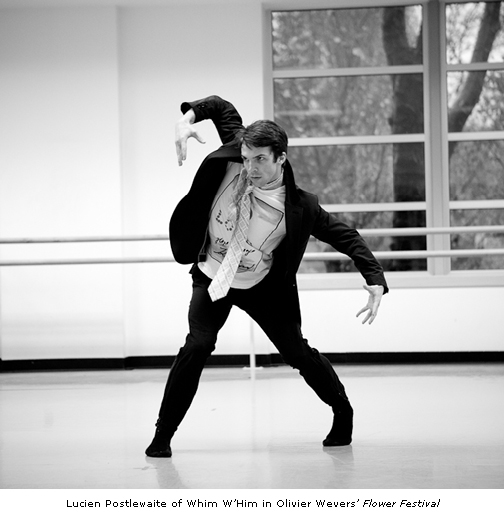 Olivier Wevers’ Flower Festival was performed by Seattle based Whim W’Him, a company who is completely new to me and who absolutely knocked me out with an amazing comic performance.  Two men in business suits sit at opposite corners of the floor, having removed their black dress shoes.  One at a time the men approach each other.  They are teasing and challenging as they gradually strip away their clothing, one article at a time.  The dance also contained a few partnering sections that were great parodies, in which standard ballet passages were blown up to the point of camp, or one partner wound up dragging the other around by his collar.  There was even a brief game of salugi.  Amazing performances were given by Andrew Bartee and Lucien Postlewaite.  Great costumes by Mark Zappone.  I hope to see this company in New York City again.

Charlotta Ofverhom ponders matters of food, both literally and metaphorically in Pas de Deux Sans Toi, a piece that could be both somber and comic, most of which she danced with a heart of lettuce in her mouth.  When her partner joins her, he seems to devour her, and when he leaves her she consults the audience about her fears and matters of the heart.  She did a good job of dramatizing how vulnerable we can feel within relationships, and how sometimes there is nothing left to do but to laugh about the folly of it all.

Lydia Johnson Dance’s beautiful untitled excerpt had a Greek classical feel with influences from Graham and Sokolow.  The women wear floor length skirts and they dance in a line.  They seem like sisters or women within a close knit community.  They tend to one another, supporting and soothing one another.  The dancing at times travels along the perimeter of a wide circle.  There was also a wonderful series of trios.  The choral music gives the piece an ancient atmosphere and so much of the movement reminds me of images from classical Greek artworks.  I especially liked this piece and I look forward to seeing its full length version.

Ballet Next delivered a dazzling performance of Balanchine’s Tchaikovsky Pas de Deux to accompaniment by a live chamber orchestra.  Confident and fearless, happy and carefree, Michele Wiles absolutely sparkled and looked as if she was having so much fun.  I can’t recall the last time I saw a ballerina looking so light hearted and it really lifted my spirit.  Charles Askegard, as usual, made the superb partner.  Ballet Next’s second offering was Mauro Bigonzetti’s La Follia, danced by Wiles and Drew Jacoby.   Their presence, their attacks and their movement made a sharp contrast that worked so well.  The piece is energetic and sensual, full of interesting hand and arm movement.  Just breathtaking.

Dana Foglia Dance brought the house down with their closing number, Stilhed/Rock On, an exuberant fusion of hip hop and modern dance performed by a youthful and very stylish cast.  The dance was so entertaining and won a rousing response from the audience, closing out a great series of performances on a very high note.

You never know what you’re going to find when you attend APAP Showcases.  In the past, I’ve usually found APAP series to contain a few strong dances bolstered by several that just aren’t yet ready for the stage.  But this APAP Showcase at Peridance was just out of this world.  Both my guest and I were just stunned by the consistently amazing quality and variety of dance that we saw.