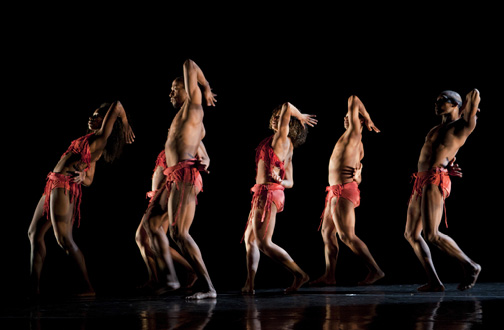 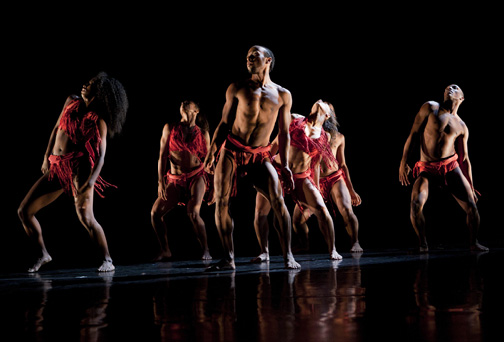 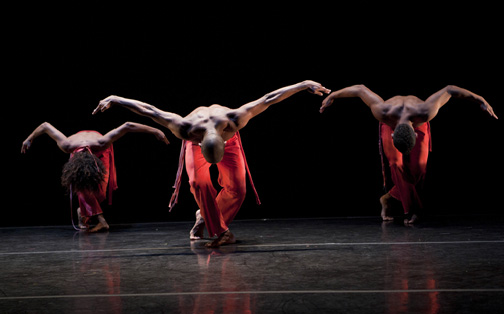 A Jornada, created in 2001, describes the journey of Africans to Brazil and their struggle for liberation.  Live musicians provided what I considered to be an especially moving and then exhilarating score, composed by Marcelo Zarvas.

As the dance opens, six men are seated in close proximity of one another.  Their torsos slowly lengthen and release, and it leaves me with the impression that they’re on a ship.  They rise to their feet but are soon seated again, facing a new direction.  They hold together in a close formation, like a tribe, and they tend to crouch close to the earth as they move.  The dance opens up a bit as women join them.  There are lovely high lifts and many rippling isolations in the upper body.  But the travels never remain smooth for very long.  They are interrupted by sudden turbulence as hypnotic repetitive phrases are played on the strings.

In the second section, much of the movement is still close to the ground, deep in the knees, but the solemnity seems to lift.  The music is joyous.  The men turn cartwheels, barrel turns and ariels.  Everyone’s smiling and we feel as if we’re at a celebration.  The steps are quick and the swaying women are sexy.  The men jump impossibly high, drawing their knees all the way to their chests as they reach the apex. 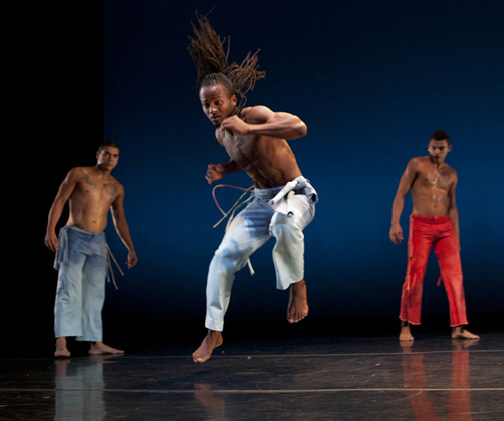 The final section opens with what sound like gunshots played on the drums.  The dancers tense up and shudder.  The drums sound like thunder.  The music is absolutely stunning as the bravura kicks in.  The capoeiristas take on one another, each one strutting and showing off his moves.  It’s all performed with blinding speed and some of the dazzling movement seems to defy gravity.  The men nearly hold themselves horizontally in space, their upper bodies parallel to the floor, while their legs sweep and strike.  They come close to flying. 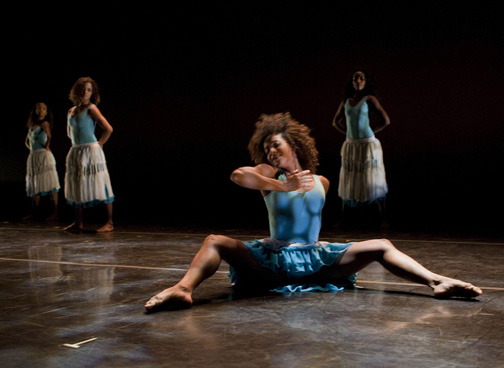 Batuke was given its New York premiere.  In the program notes, Vieira writes with such affection about his personal history with the Batuke music of capoeira, which his mother used to refer to as “noise”.  If it was noise, then it was beautifully rhythmic and full of celebration.  You can read Vieira’s liner notes here and view a video of Nana Vasconcelos playing the berimbau , a traditional African instrument used in Brazil in the practice of capoeria.  The piece was performed with the live accompaniment of three percussionists.

I couldn’t identify a narrative in this dance.  It was just pure joy, pure dance, pure jubilation, pure celebration of the drum and of capoeria. .  The audience couldn’t help but get caught up in the exhilaration and they gave a loud enthusiastic response.

Again, the dancers move in groups throughout and rarely stray from one another.  The choreography always seems to contain an undertow of unison and community.  In turquoise leotards and long white tassle skirts, four women ripple and sway and occasionally rub their hands together as if they were washing.  The capoeristas join them.  They are dressed in traditional costume, each carrying sticks that remind me of Indian clubs or nunchucks.  They begin by using the instruments to accent beats in the music, but as the capoeria battles ensue, each capoerista strikes a stick against that of his opponent, always in perfect rhythm with the music. 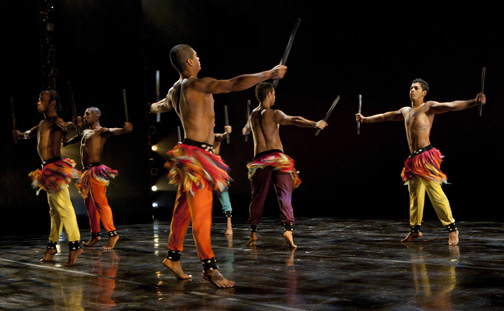 For all the flash and acrobatics of the capoerira movement, the artists never sacrificed heart and soul, and never lost their connection to the music or to the earth.  It all fused together into an exhilarating whole which deeply affected the audience and brought them to their feet.