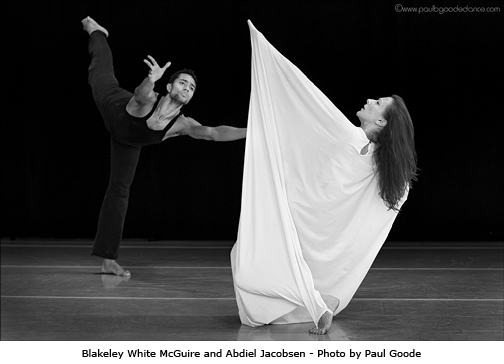 The experience of an audience member can be so deeply enhanced when an Artistic Director takes the time to do what Janet Eiber does in the Graham Deconstructed events.  This is a series of informal talks and performances which are presented in the company’s home studio.  Before a “mini-performance” gets underway, Ms. Eiber takes the time to talk about the history and the behind-the-scenes stories of the dances we’re about to see.  This “archeological dig” through the work includes commentary from the original dancers and accounts of things that were said and done in the studio while the work was being created.  I am grateful to the Graham company for their continuing efforts to bring us closer to the dancers and to Graham’s process.  The piece being discussed this evening was Graham’s 1981 work Acts of Light

The commission was brought in by a Danish board member, whose only stipulation was that Graham had to use music by Danish composer Carl Nielsen.  The music is gorgeous — thick, lush and dramatic.  But it’s said that Graham, who preferred plainspoken music for dance, hated it.  “This music is going to bury me!” she declared while creating this ballet.  During the performance I could begin to see her point.  I did feel that there were some moments where the music threatened to overpower the choreography.

We also learned a bit about the paces that Graham put her dancers through in the studio — encouraging them to compete for featured roles, and withholding her decision about who would be cast until the last minute.  For the third section of this dance, a series of duets, trios and quartets, it’s said that Graham just divided up her dancers into smaller groups and told them to come up with something quickly, or else their roles would be given to others.  Graham dancer Peggy Lyman said that as a result, the piece came together in a hurry.

The dancers performed on the studio floor in their leotards.  From the opening moments, and throughout the dance, their focus is often cast upward to the heavens, the chest and arms held open as if in prayer.

The first section, A Conversation Between Lovers, featured principal dancer Maurizio Nardi and soloist Xiaochuan Xie.  The music is romantic and dramatic, and the dancers move with a sense of joy and a subtle playfulness.  All the artistic athleticism of Graham’s work is on display here.  Ms. Xie is on her back on the floor until Mr. Nardi scoops her up and lifts her overhead with wonderful blinding speed.  Though there is chemistry between the lovers and they are involved with each other, they also keep gazing upward, as if acknowledging a divine presence.

Accompanied by five men, Blakeley White-McGuire emerges dressed in stretchy white fabric for Lament.  Her costume is not so different from the black tube “torque of grief” worn in Graham’s 1930 landmark dance Lamentation.  According to Ms. Eiber, the dancer who originated this role had been through a terrible ordeal, and Graham chose to incorporate this into her choreography, this time moving beyond a portrait a grief alone, and including a focus on the resilience of the human spirit.  Ms. White-McGuire falls and struggles but also rises, sometimes into breathtaking high lifts.  There is an intense seriousness to her posture and her movement, a real heaviness of spirit.  This is sometimes echoed by the men who perform movement that seems earthy and ritualistic.  They circle her or pound on the floor.  In the final moments of this section, they move as if in a processional, and lift her above them.  The image is reminiscent of the closing moments of George Balanchine’s Serenade, and I wondered if that was a deliberate decision on the part of Martha Graham.

One of the loveliest aspects of this performance, whether it was intended or unintended, occurred during the closing section, Ritual to the Sun.  The performance took place on the eve of the summer solstice and at this point of the dance, the dancers became bathed in the gorgeous evening sunlight that poured in through the tall studio windows.  It lent a beautiful ethereal atmosphere to the piece.

Graham has famously said, “I believe that we learn by practice. Whether it means to learn to dance by practicing dancing or to learn to live by practicing living, the principles are the same. In each, it is the performance of a dedicated precise set of acts, physical or intellectual, from which comes shape of achievement, a sense of one’s being, a satisfaction of spirit. One becomes, in some area, an athlete of God. Practice means to perform, over and over again in the face of all obstacles, some act of vision, of faith, of desire. Practice is a means of inviting the perfection desired.”

Toward this end she incorporated a theatrical version of her daily class into Ritual to the Sun.  I had only ever seen this movement performed in high school and college classes.  To see the company’s prayerful execution of this same movement, in that evening sunlight, got me all choked up.  It was as if they were praying through their bodies.  The energy in the studio was extraordinary.

Throughout the crescendo of the dance, I became aware of each dancer’s unique voice and body and of their fierce energy and strength.  The trios and quartets were soulfully danced, with ritualistic unison patterns, or impossible tilts and soaring lifts, all carried out in a prayerful attitude.

Every time that I leave the theater after having seen the Martha Graham Company perform Graham’s original works, I am always overwhelmed by the way in which the dancers and the choreography have displayed the strength of the human spirit.  It always feels as if Graham’s enormous energy is still making its presence felt inside the theater.

Graham Deconstructed is an ongoing series.  You can subscribe to the company’s mailing list for future updates.  The Martha Graham Dance Company will be performing at New York City’s Summerstage on July 23 and July 24, 2013.  They will be at Jacob’s Pillow on August 21 through August 25, 2013.

Open Rehearsal with Ballet Next
This entry was posted in Dance, Karen and tagged Acts of Light, Graham Deconstructed, Martha Graham Dance Company. Bookmark the permalink.