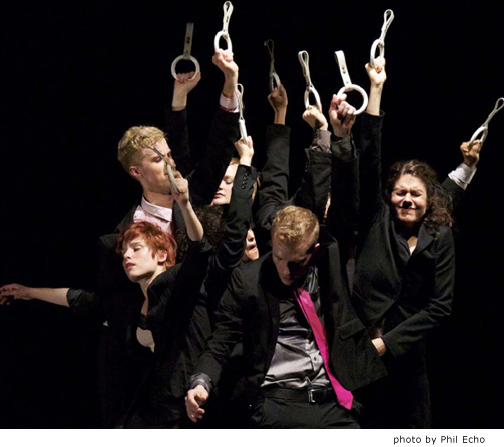 Salaryman is a masterpiece, one that I want my dance friends to see, and one that I’d like to see again and again.  Its spirit and imagery haunted me long after I left the theater.  Takehiro Ueyama’s powerful choreography depicts the life of the Japanese businessman.  He tells the story of the Salaryman’s dutiful resignation to his bleak existence in movement that runs the gamut from the aggressive and athletic, to the slow, lovely and lyrical.  Also of note in this production was the exquisite use of stage craft, props, lighting and video.  And best of all were the traces of humor and humanity that surfaced in unexpected moments.  The choreography is very demanding and each of the multi-dimensional dancers pulls it off with apparent ease and strong individuality.  I loved this piece and I loved this company.

The evening length dance opens with the sleeping Salarymen waking to a new day.  A metronome placed upon a clear plastic cube pulses with urgency, counting the passing time. There is a beautiful live violin accompaniment by Ana Milosavljevic as the Salarymen awaken.  The sheet which made up the Salarymen’s bedding transforms into a sail and a stage curtain.  The dancers pose in different vignettes, changing each time the sail passes over them.

The metronome and other pulsing sounds reoccur throughout the dance, as does the presence of the cubes and the flow of water.  I was left with the feeling that the cubes symbolized the vessel of the Salaryman’s life, while the movement of the water symbolized his life’s energy – his spirit literally slipping through his fingers as he chooses, with the best of intentions, to live the obedient life.

Excitement revs up in The Game, a quartet for men dressed in business suits, which dramatizes the hustle and the grind of office work.  The men move with fierce athleticism.   The pulsing drumbeat speeds up   The dancers are all aggression as they deliberately bump shoulders, scramble to move ahead in line, step over one another and even throw one another as the drumming intensifies. 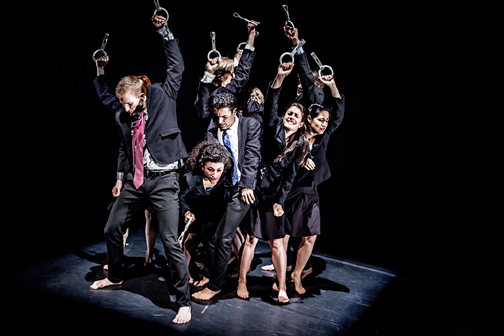 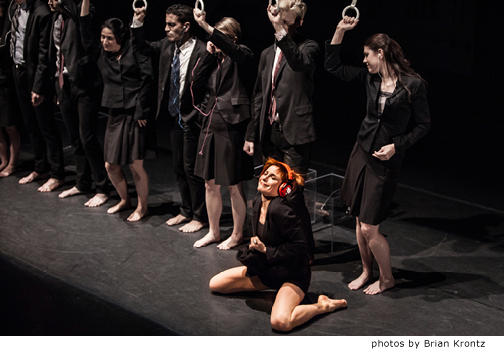 There are terrific sections portraying the daily commute.  Any New Yorker who regularly rides the subway can recognize the characters on the Salarymen’s train, and it’s here that Take showcases humourous new twists on everyday movement.  One woman checks her make up in her pocket mirror.  One man is nodding off and leaning too heavily against the passenger in the next seat.  Everyone wears ear phones and few commuters pay any attention to their fellow passengers as they jostle along together.

The Salarymen travel to the Red Light district and tango with forbidden fruit, but it seems as if they receive as little respect from their temporary companions as they do at the office.  The women knock them on their backs, then leave with their chairs.  But when another woman dressed in street clothes approaches each one of the men, offering a bright red apple as a symbol of her genuine love and affection, she can not seem to impress any of the men whom she pursues.

The Salarymen drift home and are sometimes emotionally unavailable to their wives.  One of the housewives, left behind while her man dallies with another woman, performs a slow moving solo full of yearning –  heartbreaking without ever being cloying. 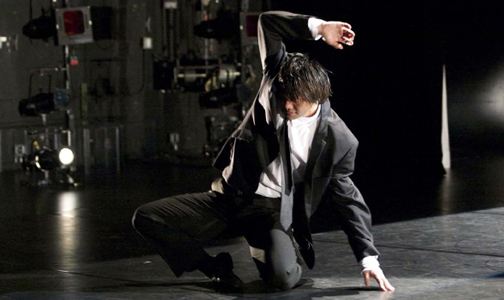 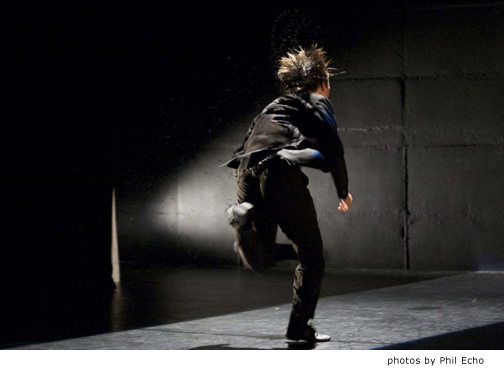 The first act closes with a piece titled I’m Worried Now, But I Won’t Be Worried For Long performed by Takehiro Ueyama, depicting the upshot of the desperation that the Salaryman experiences.  He appears to be stricken and losing his mind, wildly and compulsively moving upstage and downstage.  Others look on in shock.  Despite the fact that they’re aware of his distress, they all proceed like cogs in the machine and no one breaks character or reaches out to help him.  They even go so far as to step over him.  Still, we are stunned and devastated when we see what this man’s madness drives him to do. 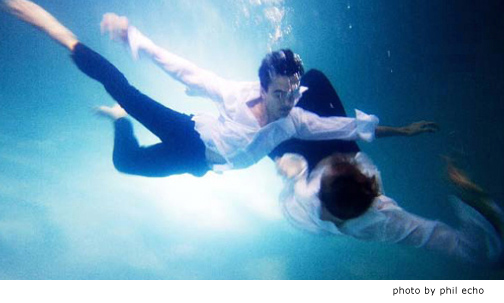 Act II opens with the dancers looking startled and moving swiftly, their focus turned to their newspapers.  Everyone reading the paper or talking on the phone or typing on their computers seems alarmed and anxious to spread the story.  I was wondering if the story was about Take’s character’s desperate act.  The excitement reaches a fevered pitch, leading into a beautiful and haunting passage in which the white sheet returns, is laid across the floor, and the stage goes dark as a video of the men swimming under water is projected on to the sheet.  It’s as if a pool has opened up in the middle of the stage.  Or, given the fact that the dancers are sitting by the side of this pool watching carefully, perhaps the Salarymen are on display in a fish bowl or an aquarium.

Sober business attire is traded in for the casual colorful clothing of youth for Kimochi E (I Feel Good).  The piece is a riotous celebration of exuberant dancing.  The dancers turn cartwheels and flirt with one another, sweeping across the stage and having great fun until they are rocking out full bore to a blistering guitar solo. 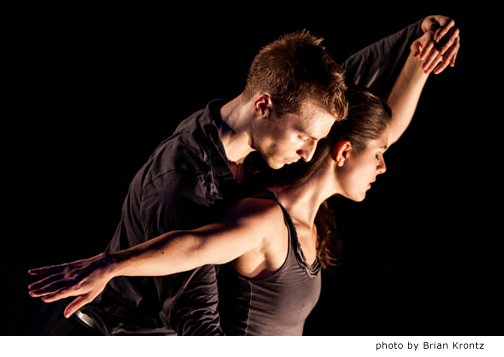 Everything goes gray for the somber Whispering Wall.  Movement slows down as a quiet, moody pas de deux is performed with little traveling – most of the movement is happening with just the arms.  Each of the dancers drifts toward approach the back wall and later sinks on to their backs.

The closing moments of Salaryman include exquisitely beautiful use of lighting on the water which flows from one plexiglas cube to the next as the metronome starts up again.

I was especially happy to see Lynda Senisi dancing with this company.  I met her at her local Brooklyn studio when she was all of eight years old.  It’s been wonderful to have watched her throughout the years as she’s blossomed into a magnificent dancer.

Ronald K. Brown and Evidence at the Joyce

Nai-Ni Chen – Year of the Serpent
This entry was posted in Dance, Karen and tagged Salaryman, TAKE Dance, Takehiro Ueyama. Bookmark the permalink.