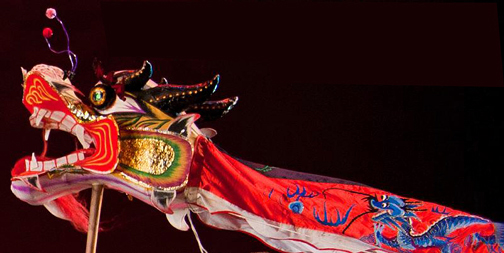 I’d been wanting to see the Nai-Ni Chen Dance Company for years, but it wasn’t until last weekend that I finally made the trek out to Newark to see the company celebrate the Chinese New Year with their production Year of the Serpent.  The program was a wonderful mix of traditional Chinese dancing, music and opera combined with a new contemporary piece, Whirlwind, which received its world premiere this year.  The dancers moved seamlessly between the different dance styles.  It was very generous and helpful of the company to have provided the audience with detailed descriptions of the history and inspiration for each dance, along with narratives about the peoples and customs of the different regions of China from where these dances come.

The performance opened with a piece called Double Lions Welcoming Spring which tells the story of trust built between young children and ferocious lions.  The dance is intended as a prayer for peace and harmony in the coming year.  Playful and often funny (such as when the lion forgets himself on stage and nibbles on his own foot, or throws in an extra cabriole before exiting the stage) the dance includes dazzling acrobatics and tumbling sequences.  Each lion is played by two men who do an amazing job of making the beast’s back ripple in feline fashion, or making it rear back on its hind legs.  The Chinese folk costumes and the design of the lion are so beautifully done.

In Song of the Water Lily, dancer Ying Shi embodies the beauty and purity of a young girl.  She carries a fan ornamented with a lovely billowing scarf which resembles a flower petal.  The lighting and music create the atmosphere of a lily pond, down to the sound of water droplets and bird songs spliced in with the traditional folk music.  There is a wide sweep of movement, from luscious slow and controlled extensions and port des bras, to a rapid success of turns executed while spotting the floor.  The dance is at once ornate and colorful as it is earthy and primal.

Another traditional piece, arranged by Ms. Chen, was the rousing Coin Stick Dance.  Bamboo sticks filled with coins create a host of different rattling sounds as they are tapped against shoulders, hips and floor, or twirled like batons.  The dance was presented as an ensemble piece, but had lovely partnering sections in which pairs of dancers tapped their sticks together.  The piece was marked by pretty formations and nice footwork sequences. 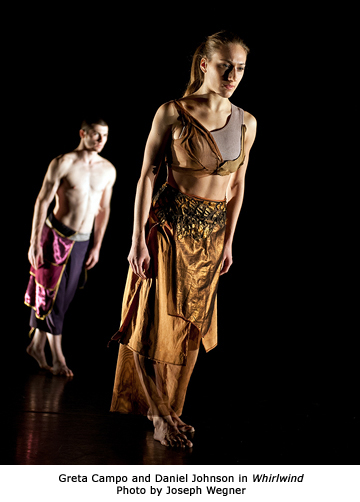 One of the highlights for me was seeing Ms. Chen’s earthy modern piece, Whirlwind, inspired by her journey on the Silk Road.  It opens with six dancers standing still on stage, very subtly swaying forward and backward on the breeze.  In this section, and throughout the piece, Ms. Chen used groups moving in unison, save for one dancer.  These formations seemed to embody the phenomenon of the whirlwind, which she described in the program as coming from different directions.  In the opening section, the dancers’ mostly remain in their spots, but they execute beautiful adagio movement with the upper body and the plie, creating the atmospheres of a coming storm.  As the dance builds, influences of various cultures can be appear.  The energy of the wind can be felt in contractions and sighing movement.  I loved the section danced by the men, locked onto one another’s arms in a circle and swaying together in a way that seemed ancient and ritualistic.  Great original movement in this dance and beautiful artistic execution by the dancers. 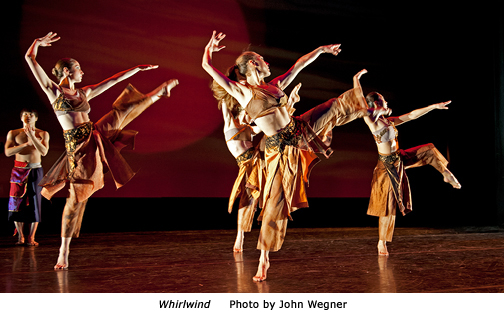 Min Zhou shone in the traditional Peacock Dance from her charming staccato birdlike gestures, shuddering shoulders and expressive movement of the upper body, to her lovely transitions into slow and controlled adagio phrases.  She held her arm above her head, her hand shaped like the head of a peacock, her floor length skirt draped to resemble its plumage. 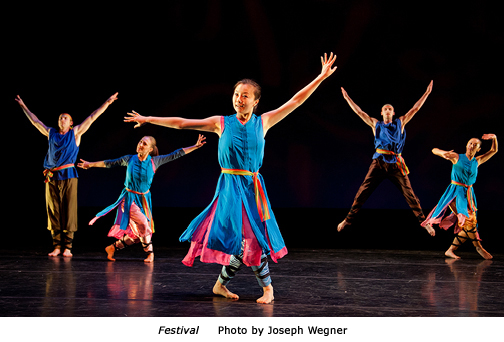 The program closed with Chen’s traditional piece, Festival, a spectacle of cartwheels, barrel turns, colorful ribbons, and flags, complete with a dragon dance in which the dragon takes a spin around the audience.  The piece was great fun and a fitting close to a beautiful program.

A Tribute to Remy Charlip – H.T. Chen and Dancers