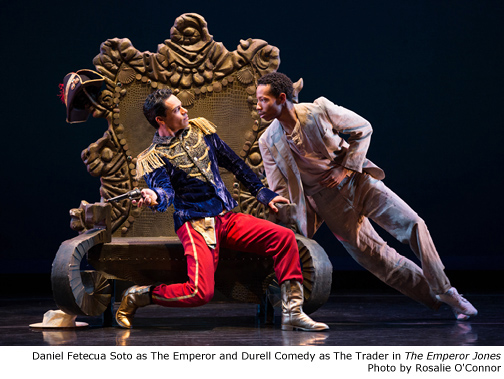 The Emperor Jones, a revival of a 1956 piece choreographed by Jose Limon, depicts the decline and fall, and the reflections of a gang leader turned dictator.  Seated on an ample throne which sometimes tilts, he is dressed in a military costume with epaulets.  In the early moments of the piece, his gang arrives to check him out with choreography and movement reminiscent of West Side Story.  In a later sequence, props that resembled bare trees, or maybe even prison bars were used to good effect, each one concealing two men.  Compelling compositions were created as limbs and bodies unfurled and then hid again.  Daniel Fetecua Soto brought swagger and strong  but understated emotion to the role of The Emperor.  Plodding through his own nightmare, he alternately seems defiant, resigned and haunted, a perpetrator and victim of violence.  I was especially affected by the heavy movement in a scene evoking a chain gang which winds up absorbing The Emperor.

Roxane D’Orlenas Juste danced Limon’s classic Chaconne.  The spare and elegant movement tends toward the stately and reserved, but as the music soars, the dancer seems to nearly break free of the formal framework, often in sequences of travelling turns, only to return to it again. 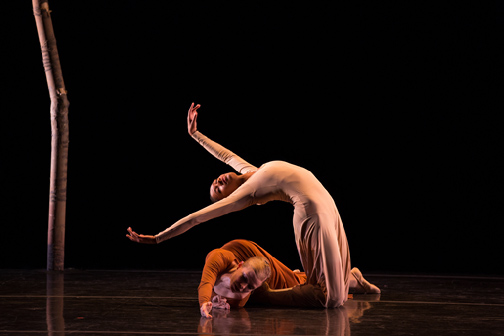 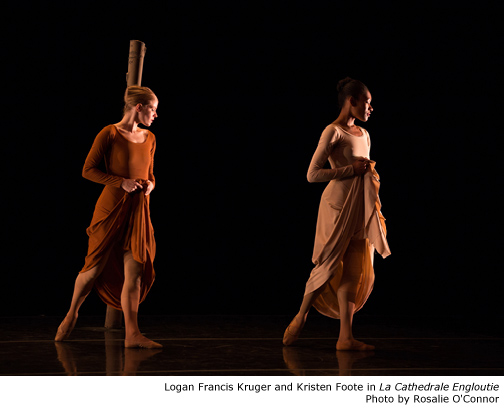 I loved the searching looks and fluid rolling movement of Jiri Kylian’s La Cathedrale Engloutie set to the sound of crashing waves against Debussy’s haunting piano chords.  As the partners move toward each other, then drift away and come back together, I could almost feel the wave-like rocking of the ocean.  The small movement of the feet also reminded me of water lapping against the beach.

Come With Me, choreographed by Rodrigo Pederneiras to the music of Paquito D’Rivera, received its world premiere.  In a series of vignettes, the dance focused almost exclusively on footwork — upper bodies tended to stay still and arms rarely rose to shoulder level. Some passages in the choreography almost reminded me of a sailor’s hornpipe.  The choreography and movement was very musical.  This playful piece seemed to be a favorite among the dancers, especially the women whose smiles were beaming from beginning to end.  Despite the reserve of the upper body, the Latin flavor of the piece comes through in the festive costumes and the swooping synchronized partnering.