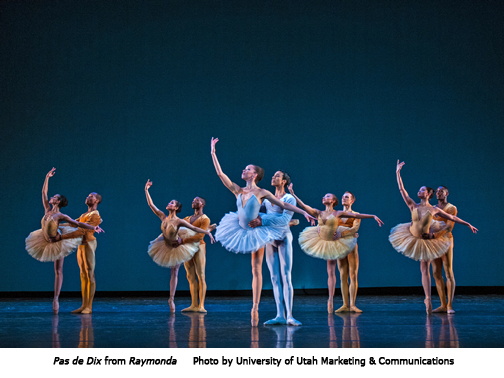 Dance Theatre of Harlem
Jazz at Lincoln Center’s Rose Theater
April 23, 2014
Program A
.
Dance Theatre of Harlem made its comeback in 2013, ending a nine year hiatus brought on by financial difficulties. Since then, they have toured twenty-six cities at home and abroad. Their 2014 season at the Rose Theatre showcased a company of diverse dancers and demonstrated “how ballet can express the human spirit.”
.
The Pas de Dix from Raymonda, choreographed by Marius Petipa and staged by Frederic Franklin was, as Artistic Director Virginia Johnson said, “a celebration of pure classicism.” On the bare stage, stripped of elaborate sets, the dance maintains its courtliness. The dancers are such a pleasure to watch. Each soloist brings such a beautiful quality of movement and unique personality to her variation. They carry off the petite allegro passages with precision and their limbs unfurl so beautifully in the slower phrases. Each dancer really stood out as an individual with his or her own endearing qualities, even in the sections which employed larger groups. I especially liked the part in which the women line up on stage with their partners in a row behind them. Arm in arm, they developpe forward, then the working leg passes back into penche. The unison movement is so lovely, and they perform it without that sameness that can sometimes make ballet seem a little too sterile. Chyrstyn Fentroy is especially breathtaking in the Seventh Variation. Her bourees seem to float above the floor and the liquid movement of her arms is mesmerizing, especially in one sequence in which she moves backward on the diagonal. Francis Lawrence’s bravura turn sequence drew huge applause. 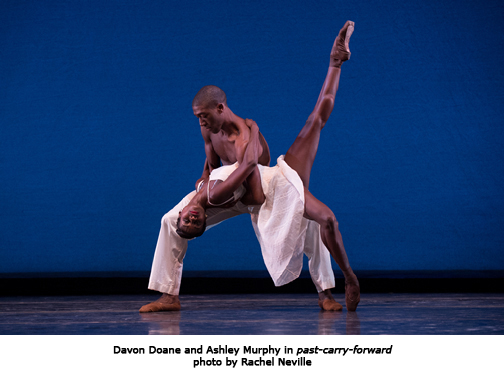 past-carry-forward is an original piece choreographed by Tanya Widerman-Davis and Thaddeus Davis. It tells the story of early 20th century African American migration from the agrarian south to the cities of the north. It opens with the sounds of birds chirping as a couple enters carrying suitcases, dressed in clothing worn in rural towns. They’re waiting for the train that’s going to take them on their journey. Their hesitation and trepidation is expressed sweetly in their movement. In the last moments before their journey begins, they both sink into splits and stay there, as if to symbolize the roots that they’ve put down on this land that they’re about to leave. We hear the sound of an arriving train, a motif that’s used throughout the dance.
.
As the story of their city lives unfold, the piece moves through a series of exciting styles of dance to the accompaniment of jazz and swing. At first, there seems to be a jubilant tone — the women laugh together and four couples seem to have great fun letting loose, as if in a dance hall. The migrants take to the excitement of city life. But the celebration quiets in a heartbreaking manner when the suitcases are open and the men exchange their city attire for the uniforms of the segregated armed forces. Men and women part company. I especially loved the passage in which the men dance together. It’s got a muscular and athletic energy, alternately aggressive and compassionate. They march in formation, salute, and dramatize the movement of combat.
.
A Pullman porter emerges, wearing a suit with white gloves, carrying another suitcase. As he works in a slow and methodical fashion, two show girls perform, waving batons, high stepping, flirting, upstaging each other and encouraging applause. There is a crackling sound to the accompaniment — kind of like the hiss on an old vinyl LP. At one point, the sound and the crackling stop completely and we hold our breath because the sudden silence is so dramatic. The narrative threads fall away and the piece continues as an abstract imagining of the ancestral imprints of all peoples, and what a world without racism would have been like, or would even be like today. I was deeply moved by the beauty of this piece. 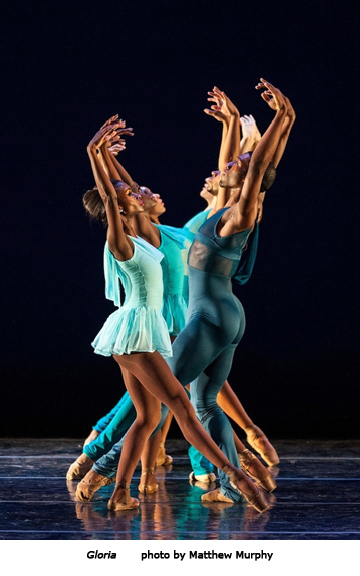 Gloria was created specifically for the dancers of this new incarnation of DTH. Choreographed by Robert Garland, the piece includes young students of DTH School, and celebrates the spiritual legacy of Harlem. The dancers are clad in costumes in gorgeous shades of turquoise, teal and aqua green. The movement captures the big spirit of the music — formidable, awe inspiring and exciting. The choreography entwines ballet with phrases of swing and popular dance. Bourees are used to great effect, and the women sometimes seem to be ethereal spirits of another world. The dance employs beautiful classical formations. Da’von Doane and Ashley Murphy are extraordinary in Domine Deus, Rex Caelestis especially in the lifts and the final exit of this section. It was impossible to remain unmoved when, in the closing moments, the children line up downstage as the lights fade. The company faces the back and the children move upstage, arriving at the front of the lines, taking their place as the new generation of Harlem.

Shostakovich Trilogy by American Ballet Theatre
This entry was posted in Dance, Karen. Bookmark the permalink.