Yesid Lopez, Co-Artistic Director and Resident Choreographer of the DeMa Dance Company, will have his latest work, Poema 15 (I Like For You To Be Still), performed this coming Saturday and Sunday, September 25th and 26th, at the White  Wave John Ryan Theater as part of the DUMBO Dance Festival.  The dance will also be featured at the festival’s Grand Finale which will take place on Sunday evening, September 26, 2010 at 8:00 p.m. at the Empire Fulton Ferry State Park, Fulton Ferry Landing, on the waterfront in the DUMBO section of Brooklyn.  Admission is free.  Don’t miss it!

I had the opportunity to interview Yesid about the Pablo Neruda poem that inspired his latest dance, about his influences, and about the new piece on which he’s about to begin work.

Is there a reason why, out of all of Pablo Neruda’s work, Poema 15 was the one that fired your imagination and inspired you to create this dance? Also, please talk about the music that you chose for this piece.

Yesid: Poema 15 is one of the most beautiful poems that I have ever read. After graduating from high school I went to a time when poetry was a priority for me to be creative plus a way to describe my feelings to a special one.  Neruda’s poetry and especially these verses complemented that romantic side that has defined my passion for life.

The music is from the soundtrack of the movie The Postman (Il Postino) which is based on a character who becomes the personal postman of Pablo Neruda during his stay in Italy.  These are two original orchestrated compositions by Luis Bacalov and one tango by F. Canaro and L.C. Amadori performed by the late and phenomenal tango legend Carlos Gardel.

Do the three couples represent anything specific to you?  The first couple seems to be the most troubled. The woman seems heartbroken and the man seems indifferent. The last couple seems to be the youngest and most carefree. Were you interested in showing how different people behave within relationships, or did you want to show different phases of relationships? Or do you want audience members to make up their own minds about what they see?

Yesid:  I would like to portray the different stages of many relationships.  It could be the story of a guy who has lost his beloved one by pushing her away and all that is left for him is memories.  It could also be three different love stories, each one with a different mood.  But at the end it is all about how the audience members relate their own  personal experiences to the story line, the music and the movement.

I overheard you and Peggy Casey, DeMa’s Costume Designer, discussing your process in creating the costumes for Poema 15.   Please talk a little about that.

Yesid:  The costumes represent that “mood” on each duet.  Peggy did a great job finding the color and creating the forms and shapes for the dresses.  As you would see they play really well with the characters and their story. In my mind, it is about the same couple with the same clothing that have changed through the years of their relationship.  But again this is my vision and it doesn’t have to be similar to the audience’s perspective.

I once read that one of your favorite influences was choreographer Nacho Duato.  Are there other choreographers or artists whose work inspires you?  Have you seen any new works lately that resonated with you?

Yesid:  My male trinity of choreography consists of  Jiri Kylian, Mats Ek and Nacho Duato.   My female trinity of choreography consists of Aszure Barton, Monica Bill Barnes and Andrea Miller.   I usually pray to their vision and genuine way of creating their own and breathtaking style of approaching art.  I have introduced myself to Nacho and Mats but have yet to meet Jiri.  I have had the amazing privilege to work with Monica and Andrea and taken a workshop with Aszure.  All of them have owned my soul in different ways and I feel I am such a product of their legacy.

I haven’t seen any new work lately.  I’m pretty much working on my options plus learning and teaching ballroom dance and salsa.  I am developing a contemporary style that would definitely have my signature based on the diversity of my background.

You are about to begin work on a new piece for DeMa titled Bolero Stravaganza, an Extrospective of the Life and Work of Pablo Picasso.  Can you tell us a little about it?  What has Picasso’s work meant to you?

Yesid:  When I see Picasso’s idea of the world through his art and the way he explored his vision and passionate talent, I feel more than inspired.  I want to embody my own idea of what I feel when I look at his Guernica and somehow every time that I listen to Bolero of Ravel or Carmen from Bizet those sounds make a perfect soundtrack for this project. 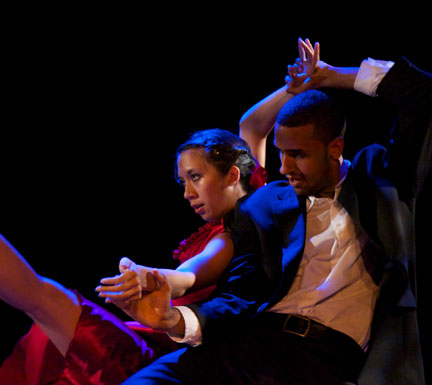 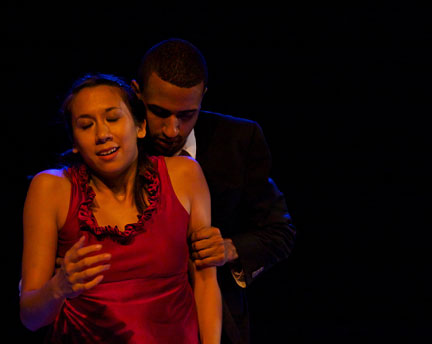 All photos by Kimberly Max