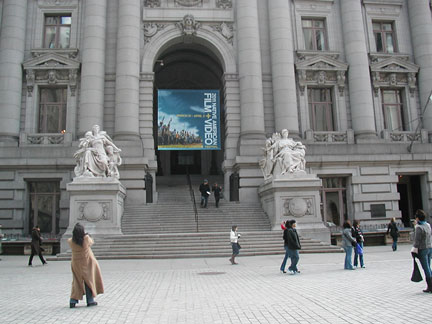 I spent last weekend at the 2011 Native American Film + Video Festival at the Smithsonian National Museum of the American Indian in NYC.  I’d planned on seeing one film on Friday evening, but I wound up returning on Saturday and Sunday and viewing at least sixteen works.  I am not a film buff and I’ve never before sat through so many films in the course of one weekend.  But the subject matter of these films and the words spoken by the film makers and their subjects were so compelling.  It was all so beautifully done that I didn’t want to leave.   Beyond that, everyone at the museum was so welcoming and gracious.  It was an absolutely wonderful experience from beginning to end.

The film I’d originally come to see was Shelley Niro’s Kissed by Lightning.  It’s a beautiful story about Mohawk artist Mavis Dogblood, who is grieving for the husband she’s just lost.  The film follows her as she prepares for a trip to New York City to deliver her paintings to a gallery.  At the same time, she is on a journey to find a way to let go and to say good-bye.

Every little detail of this film touched my heart.  The story delivers an emotional wallop with an understated touch.  The characters are fully realized and played to perfection by an amazing cast led by Kateri Walker,  Eric Schweig, Rachelle White Wind Arbez and Michael Greyeyes.  They are the type of characters who drew me so deeply into the story that I didn’t want the film to end.  It is set in deepest winter in the woodlands of Canada, not far from Toronto.  The snowy landscape and the sleeping woodlands almost seemed as if they were characters in the story too.

Throughout the film, Mavis’ ancestors are also present, and the story of Hiawatha and the Great Peace Maker unfolds in words, haunting music and images of Shelley Niro’s magnificent paintings.  There are also many laughs to share.   My heart is overflowing as I remember all the images.   In about a year’s time, the film will be out on DVD and I’m looking forward to seeing it again.

The festival introduced me to unforgettable people, characters, lands and ideas that, without these films, I might never have known.  I am so grateful to have had the opportunity to see them.  The films were programmed into groups loosely based on their subjects and themes.  At the end of each group, the film makers came forward for a Q&A.

Cry Rock by Banchi Hanuse documented the people, stories, history and culture of the Nuxalk of British Columbia’s Bella Coola Valley through live action and stunning watercolor animations.   Throughout the film, there is talk about the drive to keep the nation’s stories and language alive.  (I think that at one point it was said that there were only 15 people left who were fluent in the language.)  One young man is seen sitting with two elders and cataloging the language with them.

All of this in and of itself would have made for a substantial film, but the film maker took things one step further.

The narrator is feeling the need to learn her grandmother’s stories.  At the same time, she feels reluctance about asking her grandmother to tell her stories to the camera.  She feels that the stories would somehow become compromised if they were recorded, rather than told directly and repeated the way they’d been for millennia before electronics became so widely available.

When this topic was being discussed during the Q&A, someone said something which absolutely gave me the chills.  It was  suggested that the stories themselves are living entities, each imbued with a spirit of its own, which is much more palpable when the story is told directly, from one person to the next.  This is a concept that I’d never heard before, but the minute that the words were said it made such perfect sense to me.

It’s true that books, recordings and film have gone a long way toward replacing the act of oral storytelling.  But at the same time, I am so grateful when I get the chance to  experience stories from peoples of different cultures, stories that could never have come my way without the mediums of writing and recording.

I guess that a real balancing act will be required  regarding the preservation of these stories going forward.   For my people, the die was cast long ago and our Indigenous ways are just a blood memory.  Still  I could definitely empathize with the narrator’s reluctance to film her grandmother telling her stories.

Along these lines, one of the other film makers talked about the importance of cooking from scratch and working with one’s hands in the kitchen rather than getting their food from a box or a can, because the hands give energy and vitality and a life force and spirit to the food.

In the short titled Jack, a Lakota man who served in Viet Nam is faced with the realization that his unit, the 7th Calvary, is the same one that carried out the massacre at Wounded Knee.  I was really affected by the man’s candor and his story about how he managed to come to grips with this understanding.  I was inspired by his decision to overcome the conflict that he felt.  So much is said in the course of 4 short minutes.  You can view the film on line here.

Sally Kewayosh said of her short film Cousins, that she’d grown up on John Hughes films, and wanted to create her own coming of age story with a Native cast.  Cousins is a sweet light hearted film that captures the awkwardness of high school years without sparing the laughs.  Contemporary setting.  Terrific characters.  Really good acting.  Very entertaining.

I was deeply moved by Dustinn Craig’s A Snapshot in Time, which documents the life of his great grandfather, his relocation to Oklahoma and his return to the White Mountain Apache Reservation where he was born.  Craig also had a hand in several other films in the festival.

Amalia Cordova contributed a short film which profiled Tiokasin Ghosthorse and First Voices, the WBAI radio program that is dear to my heart.  First Voices has  introduced me to so many discussions, thoughts and guests that I’d never have heard otherwise, so it was great to get a glimpse behind the scenes of the program.

The Migration, written by Cody Harjo, was another short film that really got to me.  It demonstrated the very sad shape of America’s dying empire and what it could look like forty years from now if we continue along this course.  Relocation endures because our society has so badly damaged the land and made it uninhabitable for humans.  But even as matters worsen, it becomes evident that the only thing that will get humanity beyond this collision course is to keep faith with Indigenous ways.

In the Footsteps of Yellow Woman was created by Camille Manybeads Tso when she was in 8th grade.  In black and white sequences shot in the beautiful Navajo landscape, along with historic still photos, she imagines the life of her great great great great grandmother, who suffered relocation and internment in the 1860s.

Raquel Chapa’s Open Season addressed violence against Native women, the desperation that they experience and the lack of options that are available to them as they try to escape.  The film employed interviews woven together with arresting artistic images which are so powerful.

Siriono was set and filmed in Bolivia.  It’s a fictional story that involves a case of mistaken identity and though the delivery is light hearted throughout, all the while it’s dealing with the heavy issues of the rights of an Indigenous nation to speak its language and maintain its culture, even as their people work to learn Spanish so that they can represent themselves amongst the larger nation.

I’m sorry that I don’t have the names of the men who represented Siriono at the Q&A, because they said such interesting things.  They did not use a script for this film.   They stressed the concept of the collective in all things involved in the film, including the directing.  One of the men talked about Bolivia now representing itself as being “plurinational” (respecting the position of Indigenous peoples within the country) versus the tepid label “multi-cultural”.

The last film that I saw at the festival was Sande Zeig’s Apache 8, about a group of Apache women fire fighters.   I was so inspired by the actions, the dedication, the discipline, the words and the stories of these women.  Working as a firefighter is heroic enough, but these women each have such a strong work ethic and commitment that their outfit rose to the top of the profession.  Throughout the summer, they are called to put out wildfires all up and down the west coast.

As each woman is profiled, we learn that their accomplishments do not begin and end with fire fighting.  Most of them are mothers and several have been through heartrending hardship and loss.  Some went on to second careers and have risen through the post graduate ranks in formal education.  Several are in their 40s and 50s but maintain a very high level of fitness and focus.

It was just the most uplifting film.  I love a film that can show the possibilities that most people never consider.  I was so affected by having “met”  the women in this film.

At every Q&A session, no matter what the subject of the films, there was this urgency felt among those in the audience that these films have got to reach a larger audience.   Native voices are few and far between in American mass media and popular culture.  It’s a pity that so many predictable generic films dominate the theaters and television when there were so many films of such high quality screened at this festival that could have such wide appeal.  They are deserving of a very large audience.

Big thanks to the NMAI for hosting this event so graciously. 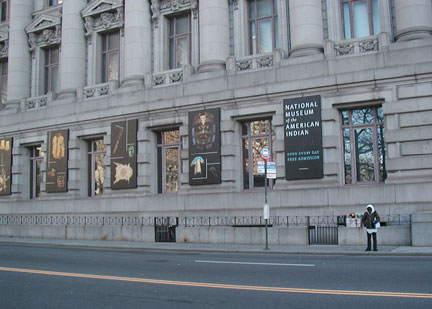 A Small Dose of Truth