Boston Ballet
David H. Koch Theatre
June 25, 2014
Photos courtesy of Boston Ballet
.
The ballet fan living in New York City is a privileged person. We have two of the world’s finest companies presenting works on an ongoing basis each autumn, winter and spring. Many of the elite international companies have seasons here too, and the smaller theatres are full of young artists trying out new works. So it’s easy for New York City fans to become jaded, assuming that we’ve seen it all.
.
It’s been more than thirty years since Boston Ballet performed in New York City. In recent years, I’ve read about their dancers here and there, but I knew very little about the company. So I came to the theatre on opening night of their New York City season without much in the way of expectations.
.
But from the opening moments of William Forsythe’s Second Detail, I was presented with a company of artists who were as strong in their technique and as full of personality and swagger as any that I’ve ever seen. They are confident and in command of their instruments, dancing with the type of authority and precision that seemed nearly magical. To say that it was breathtaking would be an understatement.
.
Second Detail is a stunning piece with great musicality and intricacies. The stage is brightly lit, the dancers are dressed in light colored cool gray leotards and the Thom Willems music can be rhythmic and noisy. The movement is fast paced and pulsing with high energy. Though the piece received its world premiere in 1991 and has become a staple in the repertory of National Ballet of Canada, it is new to New York City and it remains fresh and exciting. It represents an ideal of what ballet can look like in the 21st Century without severing its connection to its origins. Pace and directions change rapidly — quick footwork is followed by slow sensual melting movement. Classical port des bras transform into swooning or playful movement of the arms. Funky swivels of the hips, flirty jazz embellishments and everyday body language fuse seamlessly with the excitement of the ballet movement. Forsythe highlights the grace notes and small details of the music with original movement that just made me sigh at its beauty. There are brilliant accents and sharp poses emphasizing the long notes of the music as well as the rests.
.
As for the dancers, I did not want to take my eyes off of them for a split second, especially given that the counterpoint to this piece is nothing short of dazzling. I found myself wanting to watch each section individually and then to see how it came together as a whole. 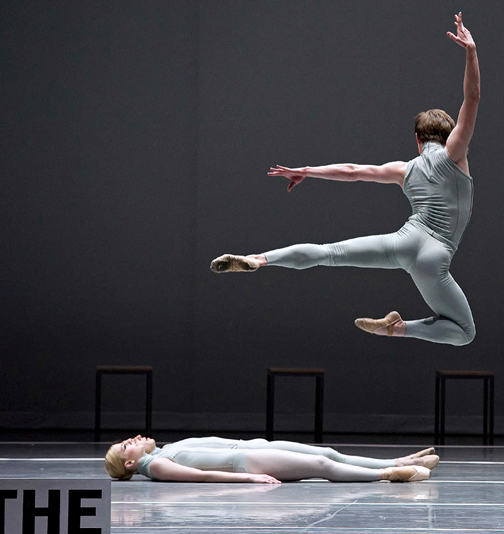 In contrast, Jose Martinez’s Resonance is a somber romantic piece full of yearning. Lia Cirio backs out on to the darkened stage as if she’s hiding in a dark alley. She is wearing a navy blue dress and as she lifts her arms, she seems to be haunted. She is joined by six women who are wearing only navy blue camisole leotards, their movement expansive and searching, capped with achingly slow single pirouettes. A narrative seems to emerge — are the women facets of Ms. Cirio’s character or do they represent echoes of her past or her most raw emotions?
.
The panels along the back of the stage move and keep transforming the space, sometimes revealing pianist Freda Locker who is playing the Liszt accompaniment live. (Alex Foaksman, stationed to the left of the stage, also provides live accompaniment on piano.) Lasha Khozashvili appears, performing slow high leaps that seem to hang in the air, and a complex series of turns which keep changing direction. He too is joined by six men whose leotards echo the gray in his costume, which might have been a uniform of some sort. As the dance unfolds, the ensemble takes on the costumes while Ms. Cirio and Mr. Khozashvili dance in leotards. At one point we are even shown the backs of the moving panels that make up the set, stripping away the artifice of the stagecraft involved, similar to the way in which the main characters shed their costumes. Dusty Buttons and Alejandro Virelles perform a more light hearted pas de deux marked by beautiful swooping lifts. Throughout the dance, it is in the soulful adagio movement that the dancers demonstrate beautiful artistry, almost as if they are slowing down time to show you every detail of the motion and emotion.
.
It seems kind of ironic to be writing a review of Alexander Ekman’s Cacti, the first dance that I’ve ever seen which is about art criticism. It’s a theatrical piece in which the dancers cast off their pointe shoes and are joined by a live orchestra, including an onstage string quartet playing selections by Haydn, Beethoven, Schubert and Mahler. The voice of a disembodied narrator sounds from the dark stage as the dancers, crouched on their knees, accompany the musicians with loud rhythmic breathing, slaps to the body, clapping, or pounding on the white square platforms beneath each one of them. Heads are covered with caps that resemble do rags and bodies are covered in nude colored leotards and baggy black capris. The dancers pose briefly to ham it up by flashing a smile at the audience. The fiddle playing becomes wild and passionate and the dancers whoop and chant while pounding the accompanying rhythm.
.
The dance is pure entertainment and fun to watch. The boxes tilt on angles or stand up like walls as the dancing revolves around them. The unpredictable movement is athletic, exploding with energy. A series of quick duets are featured under spotlights while the rest of the stage remains dark. The dancers move with wild abandon, jumping, falling, torsos undulating, arms swinging.
.
Halfway through the piece, the narrator recites a review of all we’ve seen up until that moment. It is pure parody, overwrought with adjectives, symbolism and intellectualism, which had me laughing nearly to the point of tears.
.
I left the theatre feeling as if I’d just seen remarkable dancing performed by a world class company whose technique, energy, artistry and versatility did what Diaghilev is reputed to have once demanded of Cocteau: It astounded me.

Open Rehearsal with Ballet Next