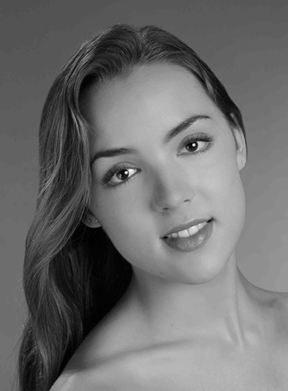 I can’t say enough good things about the Dancer Chat events that New York City Ballet hosts on selected Friday evenings before performances.  They are small scale informal conversations which take place among the artists, management, teachers and audiences of New York City Ballet.  Typically, a dancer is interviewed and a Q&A session follows.  I have been around the dance world for more than three decades, but every time that I attend one of these events, I always come away with a greater appreciation for the dancers and the company, and I always learn something new.  Joan Quatrano has moderated the sessions that I’ve seen.  She is welcoming, she raises great questions and she knows how to keep the conversation moving.

Those who attended last Friday’s Chat were introduced to Emily Kikta, who has recently joined the corps de ballet.  Though this is her first season in the corps, she’s already had the opportunity to originate a featured role in Paul McCartney and Peter Martins’ Ocean’s Kingdom.

Early on during the chat, it struck me that Ms. Kikta is not your average eighteen year old.  She appears to be sharply intelligent, poised, easygoing, confident and obviously very happy to be dancing with NYCB.  Again and again, she talked about how much fun she was having.  Suki Schorer, her teacher at School of the American Ballet (the official school of New York City Ballet) was in attendance at the chat and when asked to speak about Ms. Kikta, she called her “mature and steady, not emotionally fragile”, as some young dancers can become if they start their intense training too early.  I haven’t yet had the opportunity to see Ms. Kikta dance, but knowing that she will bring all these qualities to the stage, I’m really looking forward to seeing her.  She is tall and as Ms. Schorer said, “She’s gorgeous to look at.”

She gave us a little behind-the-scenes peek into the process of creating Ocean’s Kingdom, for which she originated the role of an Amazon.  She told a wonderful story about Paul McCartney working with the dancers in the studio, suggesting movement and expression, and even demonstrating steps and having the dancers lift him.  Her costume for the piece was starfish shaped, and she gave us insight and anecdotes about Stella McCartney’s process for perfecting their designs.  She said that when Savannah Lowery first tried on the prototype costume and kicked her leg, the entire costume ripped.  She emphasized that there were many subsequent fittings to perfect the costume and to get it to work with the movement, and that it always goes this way when a new costume is being created.

This lead to a conversation about the different aesthetics upon which different ballet companies focus.  Balanchine wanted his dancers to be “incredibly glamorous” and he labored over every detail of a costume and a ballet, down to the height of the dancer’s bun and the choice of her earrings.  They also discussed the quick and exciting attack that became the signature of a Balanchine dance.  “It’s not sleepy ballet.”

I was surprised to learn that Ms. Kikta wasn’t on a solid ballet track from a very young age.  Ms. Schorer went on to say that there isn’t necessarily an optimal age for a girl to decide that she’s going to pursue a career in ballet – it can vary from one dancer to the next.  Ms. Kikta trained at her mother’s studio in Pittsburgh, where she had a varied background which included jazz and contemporary dancing.  She was in her teens when she decided to focus on ballet.  She began by doing summer intensives with SAB.  She was in high school when she decided to stay on throughout the year.  In 2010 she became an apprentice to NYCB, dancing in Snowflakes and Flowers every night during Nutcracker season.  In 2011 she was invited to join the corps and she began to learn many ballets.

When asked how she retains all the choreography for so many different ballets, she talked about learning them in phrases, and she explained that during last week’s performance of Diamonds, she was singing the steps to herself in her head as she was dancing.  She said that the music gives her the references that she needs to remember the choreography.  Ms. Quatrano elaborated, saying that composers have remarked that SAB students and NYCB dancers are very attuned to music.  I also found it interesting that Ms. Kikta said she prepares to learn choreography by working with videos first.

Looking ahead, Ms. Kikta said she aspired to dance Emeralds or Rubies, or Wheeldon’s After the Rain.  Now that I’ve become completely charmed by her, I hope that it comes to pass.

If you are purchasing tickets to a Friday evening performance, check to see if there’s a Dancer Chat scheduled before the curtain.  They usually start at around 6:45 p.m. in the Rose Building, across the street from the Koch Theatre.  No matter how much time you’ve spent at the ballet or in the studio, you will come away from a Dancer Chat with renewed respect for the artist and the company.