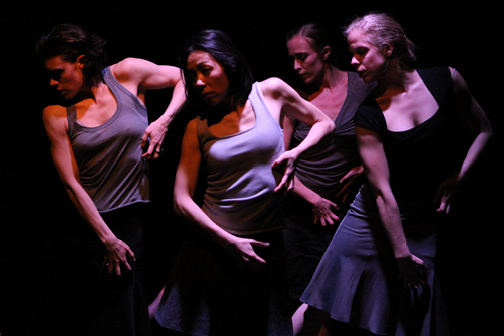 Daniela Hoff’s Shadowlands is a somber work that explores the subject of fear, “from simple worries to deep rooted primal fear”.  Her dancers are dressed in gray and black and there is a starkness to the entire performance that seems to strip away any and all pretenses.

As the piece opens, four women appear to be focused on four different things.  Two face forward, one faces back, one is curled up on the floor.

They each begin to exhibit different symptoms of fear.  One is writhing.  One can’t seem to stand still.  She steps tentatively, as if testing her mettle to move forward.  She retreats, hesitates, then attempts to move forward again.  Others twitch and tremble.  There is tightness in their shoulders.  Their arms are held close to their bodies.

From the earliest moments of the dance, it seemed to me that not only was Hoff addressing the sensation of fear, but more than that she was demonstrating its viral effects.  She succeeded in highlighting the thread of humanity that unites living things, and the way that it can serve as a conduit when fear begins to spread throughout a community.  And though she was addressing a serious and sometimes debilitating experience, the piece also reminded me, in an almost Shakespearean way, of the folly of humans and how easily they surrender to the experience of the group, maybe without even questioning what the group is doing. 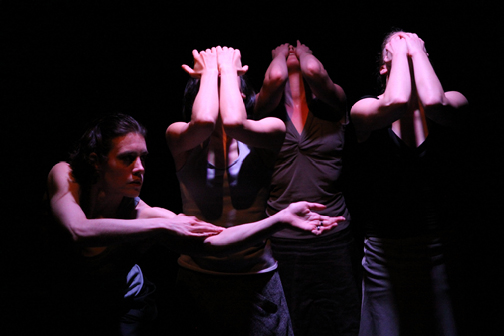 As the dance progresses, we see how fear can hamper movement and independence.  The dancers march together, as if they haven’t got the courage to break ranks, as if their unity will assuage their fear, or maybe in unity they can attack the cause of the fear.  In this theme, I saw echoes of  how folks in this country behaved in the wake of the 9-11 attacks, when “terrorism” first became a household word.  But among the dancers, individuality emerges once again when, one at a time, they choose against locking step with the others.

They’ll return to the crowd formation, again taking their cues from one another.  They seem to be testing the barometer of fear within the group.  The dancers also attempt to affect the movement of one another.  One will pose the arms and torso of another and I wonder if this is to say that their fear gives them the power to manipulate others.  Within the crowd, we see that they have the capacity to drive one another crazy.  As the dancers constantly measure one another, it leads me to believe that the group has to agree on what’s fearful in order for the fearful experience to thrive.

Throughout the piece, we will see a dancer stiffen or shake in fear until she reaches the point where her movement is almost completely impaired.  She will seek out a calmer one, maybe with the hope that she will be helped to release her fear.  In one passage, one dancer reaches out again and again to another who remains calm.  She is repeatedly pushed away.  Does fear become a burden on those who wish to remain calm? 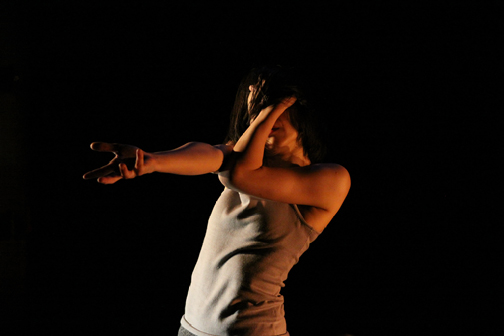 It seems as if feelings of calm and peacefulness begin to descend upon the group when the movement becomes more expansive.  Those who are tense seek out the presence of those who are calm.   Arms and torsos begin reaching in less frantic, more lyrical ways.  The dancers appear to be lighter and more buoyant as one works to keep all the others from losing their balance.

I really enjoyed the closing moments in which the dancers stand at close quarters again, in the spotlight.  As the spotlight fades and returns, they strike poses to create different tableaus.  The composition of these images was just gorgeous – great tension and beautiful counterpoint.

I’d seen Hoff’s work before, at the In Sight Suite Festival last summer.  For me, her artistic voice and the important subjects that she chooses to address really stand out and make compelling statements.