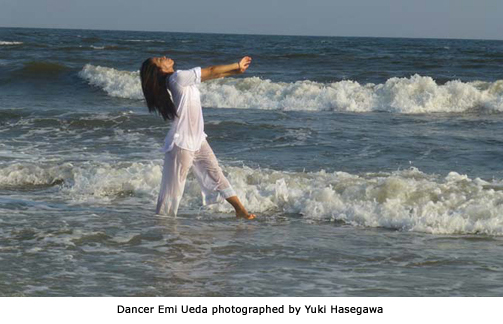 Azul Dance Theatre’s performance of Elements was marked by original movement in which beauty and artistic expression took priority over flash and tricks.  Every detail of the choreography, costumes and staging had been beautifully considered.  It’s not often that I find myself at the theatre, seeing a new company for the first time, and being so deeply effected by the high quality of their artistry.  This company was a wonderful surprise and they surpassed my expectations.

The performance opened with Mugen, a dreamy atmospheric new piece based on folk and traditional Japanese dance, choreographed by Azul’s Artistic Director Yuki Hasegawa, set to music played on traditional Japanese instruments.  The dancers wear beautiful kimonos, also created by Hasegawa.  The piece is marked with wave-like movement in the arms and torso, often with the feet fixed to the floor in a deep lunge.  After the moody and ritualistic first movement, there is inventive and humorous use of parasols in the jazzy second section.  The Japanese instruments take on the strains of a 1960s beach tune, then Duke Ellington’s Caravan.  The dancers hop, push and pull as if against gravity or the wind.  They strike a series of wonderful poses, making great use of the props.  In the closing section, a man is seated as if in prayer, his sword by his side.  But as he is meditating, a pair of arms appear from behind him, and reach into his robe, removing what looks like a scroll or a map.  The figure who took the paper, sneaks up behind another who is also in prayer position, and slides the paper into her kimono.  I felt as if the figure embodied distraction, interfering with the processes of the two mediators, breaking their concentration, and maybe even appropriating an important or sacred piece of them.  She does everything that she can in a struggle to dominate the man, even going so far as pulling his sword and holding it to his neck or his heart.

Kanako Yokata choreographed and danced in It’s not your fault.  Entering the stage on a tether, she struggles to breathe and free herself.  Once free, she struggles for balance before opening up into a lyrical adagio.  An undertow seems to keep her close to the ground, where she winds up in the center of crocheted blanket.  She pulls at the wool and it begins to unravel around her and the blanket tightens around her feet, as if she’s traded in one constraint for another. 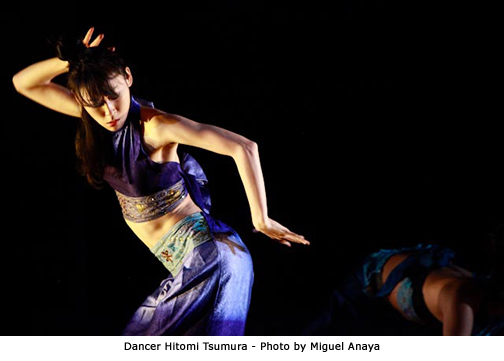 Non-western motifs appear throughout Hasegawa’s Return to the River.  The dancers enter the stage as if rolling like waves along the floor.  The music is cut with the sounds of water sloshing.  As the dance opens up, new influences appear.  There is a Carribean feel to the way that the women rock their hips and jump.  The dance builds with atmospheric lighting and a series of dramatic leaps as the dancers shriek.  Their colorful harem pants and halters make especially beautiful costumes.

One of the stand out pieces of the program for me was Double Helix, choreographed and performed by twin sisters Hsiao-Ting Hsieh and Hsiao-Wei Hsieh, set to music by Johann Sebastian Bach.  There is an elegance and a clarity to this dance which allowed the expression of the movement to stand out.  The sisters perform in a highly synchronized fashion, but this never comes at the expense of the heart and emotion evident in every small gesture.  I could have watched this dance all evening long.   It was performed with lovely live accompaniment on cello by Serafim Smigelskiy. 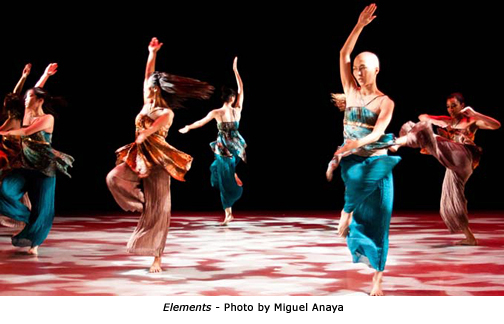 The program closed with Hasegawa’s Elements, a splendid theatrical piece.  Before the dancing even began, I was taken by the beauty of the costumes, some in rusty autumn colors and others in the greens and turquoise of the sea or the woodlands.  The first section pays tribute to water.  Torsos and arms ripple and the movement resolves in lovely ensemble poses.  Even when the dancers are just standing in place, their upper bodies are tremendously expressive.  The wind enters the story, first as a lone figure dressed in white, then as a small group weaving in and out of the ensemble, sending the dancers to twirl and spiral and roll away.  Soon the entire group is dressed in white and the dance opens up to an especially beautiful ensemble section with great partnering and counterpoint.  Really well done.  The drama builds with great use of bolts of fabric — one to symbolize the sun and others to symbolize the ocean.  The dance ends in birth so that the entire cycle may begin again.  The performance demonstrated a great love, respect and compassion for Mother Earth and her processes.  I’m told that Ms. Hasegawa named her company Azul after the blue of ocean water.

Elements lasted an hour and a half without intermission.  The time seemed to pass in a heartbeat and Azul Dance Theatre left me wanting even more.  If you have the opportunity to see this company, don’t miss it.