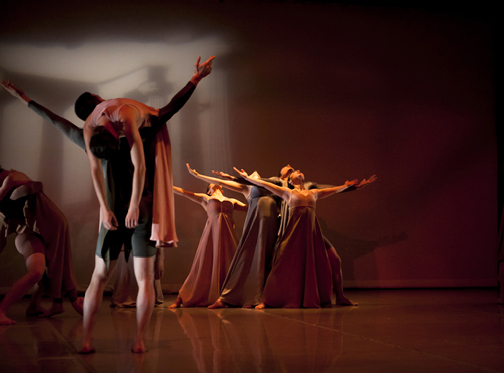 Though I’d spent years reading about Anna Sokolow, and I’d developed quite a soft spot in my heart for her words and her work, I’d never before seen her dances performed live. The program for Sounds of Sokolow consisted of three solos, an old restored film of Ms. Sokolow setting Odes on her company back in 1965, followed by a live performance of Odes by the current company. The performance was so beautiful and it surpassed my expectations.

The program opened with Two Preludes from 1985, choreographed by Sokolow and reconstructed by Evelyn Shepard, performed to Rachmaninoff’s Preludes for Piano. The music was presented live in a beautiful performance by Amir Khosrowpour.

In the first prelude (Op. 23: No 1 in F sharp minor), dancer Melissa Birnbaum rolls and slowly unfurls, reaches out and stretches, only to curl up again. She rises slowly and executes a lovely series of turns, but her movement gradually contracts and draws itself back into the torso. She winds up sinking slowly to the floor again, as if surrendering to gravity.

The second prelude is in a major key (Op. 23: No. 2 in B Flat Major) and the mood brightens. In this section she seems to break free from the confines of the earth or whatever else was drawing her down and within before. She is reaching, spinning chaine turns with her eyes closed, and executing spectacular jumps. The choreography and movement are exquisite – stripped to the essence, completely without pretension. More than anything, I am taken by the musicality of this choreography. Even the rests are beautiful and meaningful.

The second solo, At the Still Point of the Turning World is a 1975 piece choreographed by Ernestine Stodelle, reconstructed by Gail Corbin, performed to the recitation of a poem by T.S. Eliot. Dancer Lauren Naslund looks like the earth herself, dressed in a sky blue unitard. At first she seems to be searching, then pointing at something off in the distance. Her arms trace large circles as if her torso was the axis. She chaines across the floor, like a revolving planet, spotting her hand.

Artistic Director Jim May choreographed and performed the third solo, Passage, also to Rachmaninoff’s Preludes for Piano. In this piece he is either traveling very slowly or not traveling at all. At first his movement seems more stiff and twitchy than fluid. It seemed as if his character was struggling to stay healthy and alive. He falls to the ground and when he is off his feet, his arms and legs unfold smoothly. When he rises again, he walks with the same stiff movement until finally halting abruptly as the dance ends with him posed like Christ crucified in the light a moment before the floor goes dark.

The film consisted of 20 minutes of edited video from Sokolow’s Archives, and it just took my breath away. It was the first film I’d ever seen of Sokolow speaking and moving. In the opening moments, she is standing among her dancers as they work in the studio, setting Odes. She is calling the counts, but there is such emotion and commitment in her face, in her body and in her voice. We can see the breath rising and falling in her chest and her arms. She’s completely entrained with her dancers and with the drama of each step. Inside her studio, her intensity is astounding. I can only imagine what it must have been like to feel the energy within that studio all those years ago. And I had to smile when I heard her New York City accent.

We see her being interviewed, saying that in our society, that which is popular is usually “nice and harmless” and that she has no interest in that.

Back in the studio, we can see the immediacy and urgency with which she works. When one dancer’s movement isn’t fluid enough for her liking, she declares that movement doesn’t stutter if it’s truthful. She talks about the need for total commitment to the dancing, not just in the mind and the body of the dancer, but commitment to the moment in time in which the choreography is being danced. She talks of “extreme physical concentration.”

There is a passage in Odes in which the dancers (a rather large ensemble of 23) have to rise from the floor together, in silence, during a pause in the music, even though they are all facing front and therefore can’t see one another. Sokolow talks about how people in other civilizations dance without music because they learn to sense one another, and she urges her dancers to train themselves to sense what the dancers around them are doing.

She stands against academic and intellectual thinking in the studio. She uses emotional or visual imagery, telling her dancers to move like the wind. Every movement must be done full out at all times. She urges her dancers to have such a strong commitment to the movement of the moment – strong enough so that they can’t simultaneously be giving consideration to what comes next.

Just seeing her speak and work was such a huge inspiration to me. It only made me want to learn more and more her and her work.

After the film, the company performed excerpts from Odes live. Because I had just seen the film, the performance took on so much more meaning for me.

The first section, danced by the ensemble, is the opening of the piece and it’s titled Octandre. The dancers are wearing unitards in different earth tones. As they crowd together, I could feel Sokolow’s intensity. As the dance opens up, we see a modern take on Greek dancing, with three women moving in a line, arm in arm.

I loved the look of the dancers. There is nothing waif like about them and there is a wide sweep in their ages. (I found that, as with Martha Graham’s choreography, a young dancer might not have the gravitas to execute some of Sokolow’s work the way that a middle aged or older dancer could.) The dancing is demanding and the dancers are fiercely strong and individualistic. They are in complete command of the space in which they work. 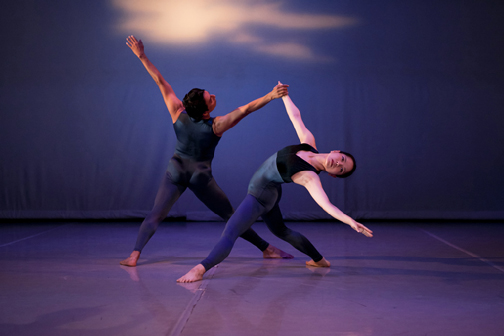 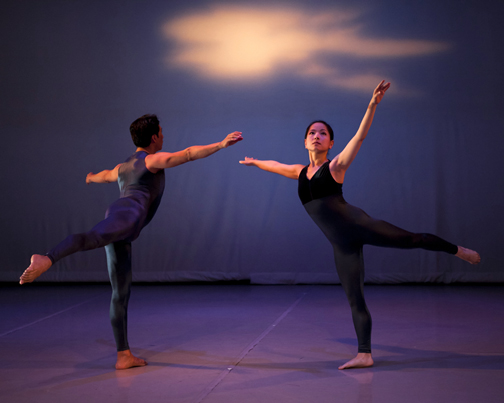 Density is a duet danced by Yayoi Suzuki and Luis Gabriel Zaragoza. There are trills being played on the flute. The dancers wear blue unitards and their outstretched arms form a “V”. They remind me of birds. In the opening adagio section, they stay close together, moving slowly in to a deep plie arabesque, or in very slow splits to the floor. They stand straight with the working leg in coupe back, then proceed to rapidly beat the top of the foot against the floor, which emulates the sound of a bird flapping its wings.

The closing section is a big ensemble for 23 dancers called Electronique. Toward the end of the piece, a sound like an air raid rises within the music and the dancers are flat on their backs on the floor, their torsos still pumping with the force of life. It made me feel as if a nuclear attack had nearly claimed the entire population. 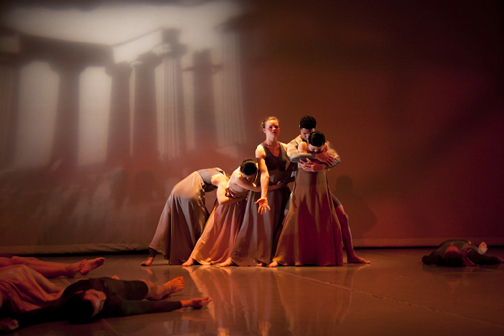 But the piece ends so beautifully with one man rising again, a split second before the lights black out, as if to show that humanity will still go on.

I found myself wishing that there were more performances of Anna Sokolow’s work. It is among some of the most gripping, moving and beautiful that I’ve seen. I’m looking forward to seeing what the company offers in the future.

A special nod to pianist Amir Khosrowpour and flute player Roberta Michel whose live music made the performance that much more beautiful. It is so wonderful to have live music played at a dance performance in as intimate a setting as the Merce Cunningham Studio.

Jennifer Muller / The Works – The White Room
This entry was posted in Dance, Karen and tagged Odes, Sokolow Dance/Theatre Ensemble. Bookmark the permalink.