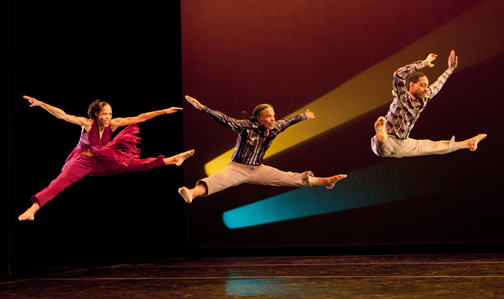 Program A of the Garth Fagan Dance Company’s Joyce season began with Prelude, which pays tribute to the rituals of the dance class. It opens with one dancer working alone. His legs and arms unfurl in different positions. It seems as if his body is reawakening to the movement at the start of a new day. He appears to be testing his balance and the physical mechanics which will deliver the expression of the heart and spirit. The music starts and the dancers enter the stage. We watch the warm ups and deep stretches, the square movement of ballet class floor work, and the isolations of the head and ribs from jazz class. The dancers are all dressed in black and they tend to stay in their own territory on the floor. A girl in green tights travels, which seems to give us a glimpse of the reward that all this disciplined ritual will bring. Different dance styles blend together seamlessly and beautifully as the dancers begin to take off and travel on the diagonal. The men perform spectacular leaps and jumps. I especially loved seeing the sweep of ages of the dancers, and the evidence that the body does not have to be 21 years old in order to move beautifully. 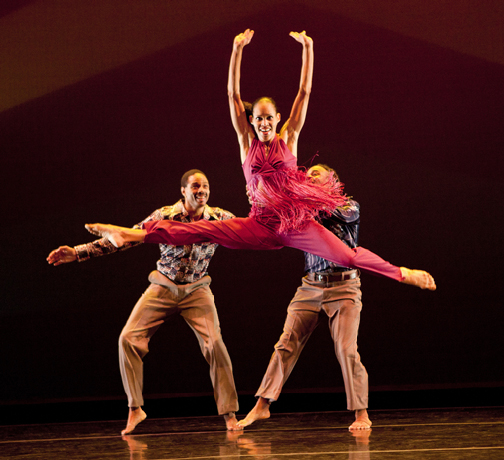 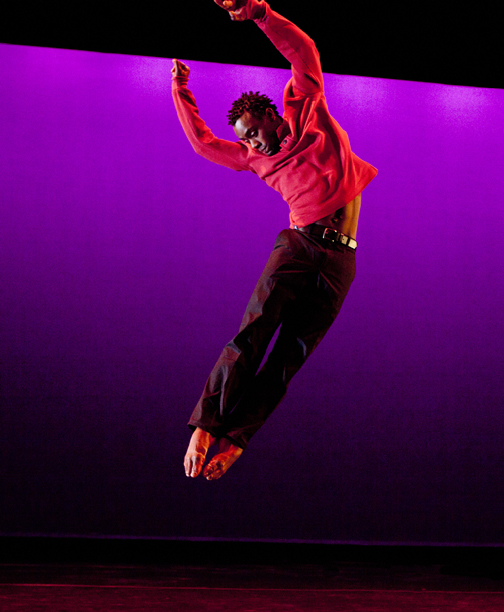 Senku is a solo, danced by Vitolio Jeune, whom we all got to see on Season 5 of So You Think You Can Dance. Jeune is such a gorgeous dancer and in this piece we can see the sweep of his skills from the most subtle and touching gesture to the bravura of his spectacular jumps. The choreography seems to be describing the experience of listening to music, describing the way that music effects the brain, the soul, and the body. At first, Jeune’s hand is to his ear. He hears the music, then executes a flying jump. He puts his ear to the floor, I’m assuming to feel the vibrations. He is staring intensely, as if possessed. Alternately, he is the listener, and then he becomes part of the music itself.

Madiba, a tribute to Nelson Mandela, was given its World Premiere this week. In the program notes, Fagan included this beautiful quote: “For to be free is not merely to cast off one’s chains, but to live in a way that respects and enhances the freedom of others.” Fagan said that he didn’t want to do a straight autobiographical piece about Mandela’s life. Instead, he chose to use this quote as his inspiration and his springboard.

The first section opens with a group of dancers traveling forward together at close quarters. This is followed by an absolutely stunning pas de deux, illustrating the courtship of Nelson and Winnie Mandela. The woman is dressed in white and the two of them can not stop smiling. The movement is joyful and exuberant. There is a series of euphoric lifts in which the man turns rapidly, often while holding the girl, who is in a front split, on his neck and shoulders.

Mandela (danced by Norwood Pennewell) later comes out on stage wearing a tiny video camera above his ear. We only notice it because the little red power light can be seen. The video that he’s recording is projected on to the back of the stage in real time. Now we can see the dancers from our own perspective and from his. As the dance goes on, we see the dancers emerge from the wings, come toward him and back away from him. When he executes turns, we see how the lights swirl as the camera passes rapidly by them. Then, from the side of the stage, he watches as the dancers form a circle. Their bodies become the bars of his jail cell, and he can only passively watch the action that is happening on the other side.

There is another very powerful pas de deux in this piece, the most memorable of the evening for me. It is danced by two women. One is black and one is white. They are getting to know each other, through looks and touches, moving closer toward each other in increments until they are sliding caresses along each other’s arms. Their movement isn’t necessarily romantic, although it could be seen that way too. Fagan said that they can also be seen as two sisters, a mother and daughter, or two female friends getting to know each other, or even two nations or two races, reaching out beyond perceived barriers, becoming familiar with what was unfamiliar, and finding truth and beauty. They can also be seen as discovering a new way to be. 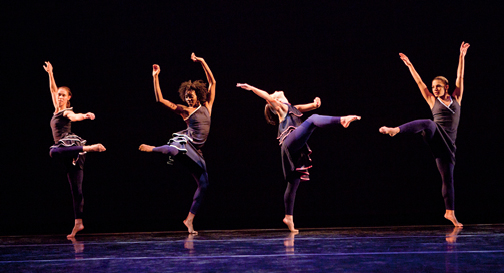 The evening closed with Thanks Forty, which premiered a year ago and is a celebration of the forty years of Garth Fagan Dance. The piece is divided into four sections; MUSE – Work, JUMP – Earn, HEAL – Pray, FETE – Joys, which is a lovely way to look at the phases of a long career. Each phase has it’s own mood and music, including classical music from Shostakovich and traditional African music.

The piece opened with a woman running backwards along the perimeter of the stage. It made me wonder if she was “rewinding” to go back to the birth of the company. The JUMP-Earn section was great fun in which the men got to showcase their spectacular leaps and jumps. I especially loved the HEAL-Pray section, danced by five women in black dresses with ruffles. The women are smiling, there are sounds of waterfalls and birdcalls, and we are taken back to what is primal and natural. FETE – Joys brings us to the climax of the celebration, and it brought the house down. I loved it that it showcased a beautiful young girl dressed in pink, alongside the company’s two veteran dancers, Norwood Pennewell and Steve Humphrey.

I adored this program. Later in the evening, when Garth Fagan came out on stage for a Dancer Chat, hosted by the Joyce’s Laura Diffenderfer, it became clear why this company is such a joy to see. Fagan spoke honestly off the cuff for about fifteen minutes. He seemed to personify a life well lived. He comes across as the liveliest, most enthusiastic, happiest man. You can not be anything other than uplifted when you listen to him speak. Or when you see his company dance.