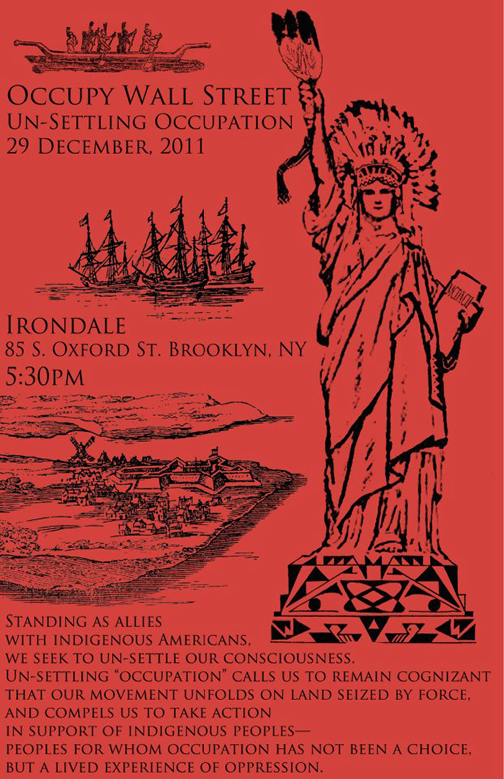 It’s long been my thought that until this nation learns to tell the truth about ourselves, our founding, our history and our current events, we will remain unable to move forward.  Some of us believe that the truth must be kept in the closet (as if such a thing was possible) because to tell the truth is to stir up “anti-American sentiment”.  But the truth remains the truth, it’s not going anywhere, it’s way more powerful than our resistance, and until we face it, we remain lost.

Long before the Occupy Wall Street movement was a gleam in anyone’s eye, I’d heard Native people say that we were living on “occupied land”.  Like anyone who’d been influenced by schools and the dominant society, I didn’t understand when I first heard it said.  But for the last nine years I’ve listened to Native speakers, read their words on line and in books, and tried to catch a glimpse of their cultures.  They’ve given me an education the likes of which I’d never even known existed and words cannot express the gratitude that I feel to those who take the time to tell the truth.

Now there is no doubt in my mind.  We do live on stolen occupied land.

When Zuccotti Park was first taken by the OWS movement, I wanted to know if the activists there were interested in telling the truth.  If it was just a bunch of  middle class people complaining about how they were suffering due to government/corporate greed without addressing the very foundation of who and what our government and corporations are and what we continue to inflict upon our First Nations’ People, our poor, our working class, our people of color, the land, and people the world over, then I didn’t see the point.  We can’t go seeking a band aid for a minor bruise when we’ve got a broken leg.  We can’t deal with a symptom of our society if we are unable to tell the truth about our society as a whole.

The corporate takeover didn’t just happen yesterday.  The injustice that the middle class is now feeling has been felt by others since the earliest days of this country.  A few years back, I heard Russell Means say that soon enough, all of America would be turned into a reservation.  It’s beginning to happen for the middle class now.   But it’s nothing new.

Unless you’re attending a NMAI event or a Pow Wow, chances are slim that you’ll find yourself in the company of an assembly of Native speakers, artists and activists in New York City.  So when I heard that such an assembly was taking place right here in Brooklyn to open a conversation with OWS activists, I knew that I had to be there.  I attended the meeting of Un-Settling Occupation last night (commemorating the 121st anniversary of the 1890 Massacre at Wounded Knee) and found it to be the most compelling experience that I’ve had since OWS began.  The conversation went on for more than four hours, mostly with Native people speaking and the rest of us listening.  Speakers included Jake Little (Oglala Lakota), Janice Richards (Oglala Lakota), Tiokasin Ghosthorse (Mnicoujou Lakota and host of First Voices Indigenous Radio on WBAI), Gloria Miguel (Kuna/Rappahannock), Joseph (Cree/Ojibwa), Firewolf Bizahaloni-Wong (Navajo), and Demelza Champagne (Turtle Mountain Chippewa).  Also appearing was the Wachamchick Warrior Society Drum.

There was talk about the unconscionable poverty on Pine Ridge and the continuing exploitation and theft of resources on Lakota and Dine land under colonization.  There was talk about the reservation system and how the government holds the land and “allows” nation members to live on it but not “own” it — meaning that the government and corporations feel entitled to come in and help themselves to resources on reservations whenever they want them, regardless of what the Native nation has to say about it or how it will affect the health of the earth and the people who live there.  There was talk about materialism and hierarchy and how those who live within such systems tend to feel as if they’ll never have enough.   There was talk about the 37 years of hard time that have been served by Leonard Peltier.  Tiokasin Ghosthorse broke down the etymology of some well worn English words and contrasted their meanings with Lakota ways of thinking.

Photos from the event taken by Javier Soriano

A Small Dose of Truth
This entry was posted in Just A Thought, Karen and tagged Occupy Wall Street, Un-Settling Occupation. Bookmark the permalink.