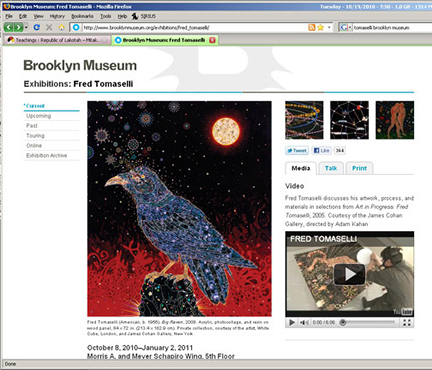 This piece really hit home with me.   I am close in age to Tomaselli and like most of those of my generation, my teen/early adult life was hedonistic.  In younger days, my top priority in life was knowing which band was coming to town next and making sure that I had a ticket to see them.   It’s only recently that I’ve begun to reflect on how my own life long indifference to Natural Law along with my pleasure seeking ways have contributed to the damage.   I felt that this piece of artwork made for a brilliant juxtaposition of themes.

In Russell Mean’s most recent video update at Republic of Lakotah, he speaks about the fact that when we lose one species, all the rest of life pays the price.  But if we were to lose the human beings, the rest of the species would flourish.

I thought of Tomaselli’s constellation as I listened to Means’ words this morning.  The constellations really shook me up without being the least bit preachy or cloying or new agey.  It was just stars, constellations and text on a black background and it hit really hard.

(It’s not my intention to disparage rock bands or to blame them for what human beings have done to the earth and its inhabitants.   The musicians whom I listened to when I was in high school and college brought more truth my way than anyone or anything else I’d experienced up until then.  Nor would I ever want to trade the experiences that I had at those concerts in 1970s and 80s.  I so loved being part of that circus.

It’s just that lately I’ve been thinking more in terms of the balance and moderation (or lack of balance and moderation)  in American life.  I was also struck by the fact that Tomaselli’s piece appeared to be balanced — it seemed to have as many stars labeled for extinct species as it did for rock bands.)

It’s funny that this was the piece that stayed with me days after I’d been to the museum, because it was a bit different, especially in scale, than most of the other pieces.  I found something to love in every single piece that I saw in this exhibit and I’ll definitely be back to see it again.

For those who are unfamiliar with Fred Tomaselli, you can see some of his work on line and in books, but it does nothing to prepare you for being in the same room with the pieces.  For the most part, they are gigantic collages, the assembly and attention to detail of which is painstaking.  Tomaselli uses images meticulously trimmed from catalogs, pressed leaves, paint and pills to create his compositions.  The pills are used almost like  beads, often appearing to be strung together in the same fashion, but sometimes the pills just dot the image here and there, along with painted mandalas.  When viewed up close, you can see that the outlines of the central figures in the pieces tend to have tiny painted flames leaping from them.  Every square inch of every piece is so deeply laden with detail that there’s no way to take all of it in in one visit.

In the back room of the gallery, there was a series of front pages of The New York Times, in which the artist had painted over the images.  One showed (my beloved) Nick Swisher standing at home plate waiting to high five Curtis Granderson on what was probably Opening Day of this season.  Tomaselli painted a sort of twisted chain link fence over the image, making it look as if both Granderson and Swisher had their hands wrapped around the chains.

The entire exhibit was just amazing and wonderful.  I know that I end every one of my reviews by saying “Don’t miss it”, but there’s no other way to say it.  If you’re in New York City and you like Tomaselli’s work, get thee to the Brooklyn Museum as soon as possible.

A great video of the artist at work in his studio.

Norman Rockwell Behind The Camera at The Brooklyn Museum

The Channels Switch But It’s All Television

2011 Favorites
This entry was posted in Brooklyn, Galleries and Museums, Karen and tagged Brooklyn Museum, Fred Tomaselli. Bookmark the permalink.