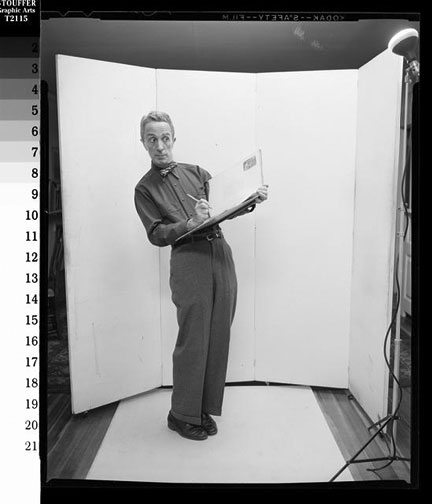 “The balopticon is an evil, inartistic, habit-forming, lazy and vicious machine! It also is a useful, time-saving, practical and helpful one. I use one often—and am thoroughly ashamed of it. I hide it whenever I hear people coming.”

Eventually photography became so integral to his process that he wrote,  “I challenge anybody to show me when I started to use photographs.  I’ve always been knows as “The Kid With The Camera Eye’.

Norman Rockwell was born in New York City.  He dropped out of High School to attend the Art Students League.  By the age of 17 he’d become the Art Director of Boys Life Magazine.  He was 22 when he did his first illustration for the Saturday Evening Post.  The association between the publication and the artist lasted 47 years.

Some of his Saturday Evening Post cover illustrations have become a iconic images of American culture.  Most people of a certain age are familiar with them.   But it wasn’t until I saw the photos in this exhibit that I could even begin to imagine the amount of careful thought and attention to detail that went in to each illustration.

Not only was Rockwell drawing and painting these images, but more than anything, he was directing the models (mostly family and friends) to pose in the photos from which he’d work.  Then he’d cobble the images together into the strong narrative in his paintings.

The exhibit reminded me of how clever and witty the narratives were.   The words quoted above are the absolute truth.  The photos and over head projector may have helped him become more prolific, but there’s no way that anyone other than a master of drawing and painting could have turned out these works.

The photos show us that when Rockwell wanted to depict his subjects in motion, he’d have someone off camera holding up the edges of the fabrics of their clothing, or holding up the ends of a girl’s long hair to give the effect.  He even got down on the ground and helped to pose the dogs who appear in his paintings. 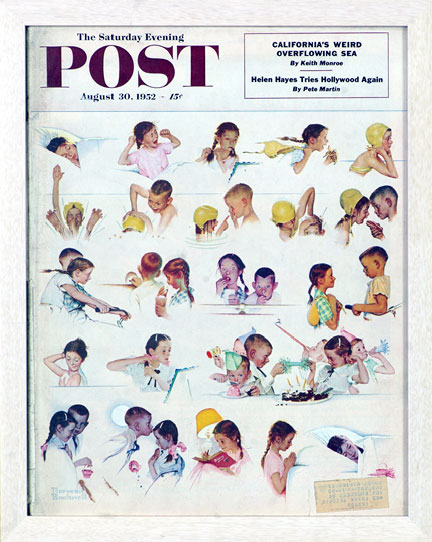 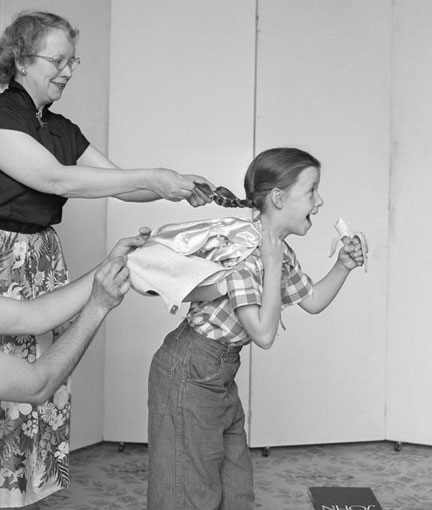 His enthusiasm for his subjects and their stories all but bubbles off the page.  Of the photo session for the iconic painting Girl With A Black Eye (below), it was said, “By the time he finally achieved the perfect expression (on the girl’s face) he was on the floor laughing and pounding his fists.” 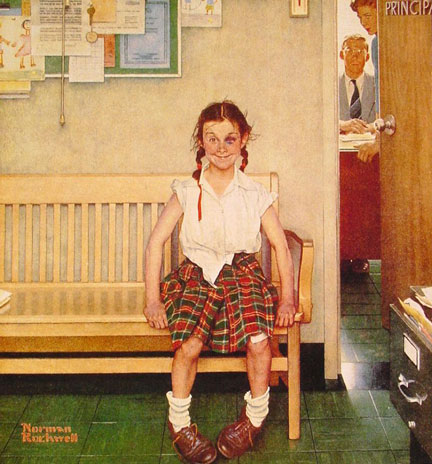 I got a great laugh from his 1946 painting titled Maternity Waiting Room.  Back in those days, men were not invited into the Delivery Room when their children were being born, but instead were relegated to a Waiting Room.  In this painting, Rockwell illustrates the way different men cope with the pressure and excitement of this milestone in their lives.  We’re shown the Frightened Novice (far left), the Chain Smoker (smoking in the hospital, just as it was done in the old days), and the Tragedian (whose face is buried in the sofa cushion).  But my favorites were the Father of Eight, who has fallen asleep on the couch, and the Hearty Salesman, who sees this as a moment to do his pitch and maybe close a deal or two before his baby is born.

The facial expressions that Rockwell was able to achieve are just sublime.  They can tell an entire story in a moment’s time. 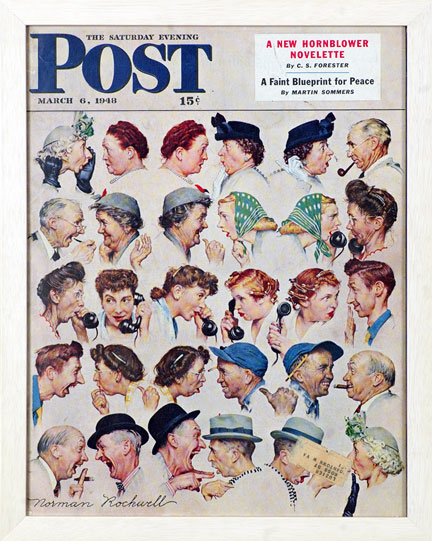 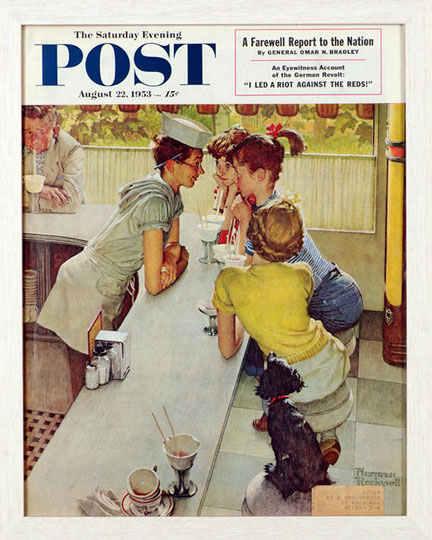 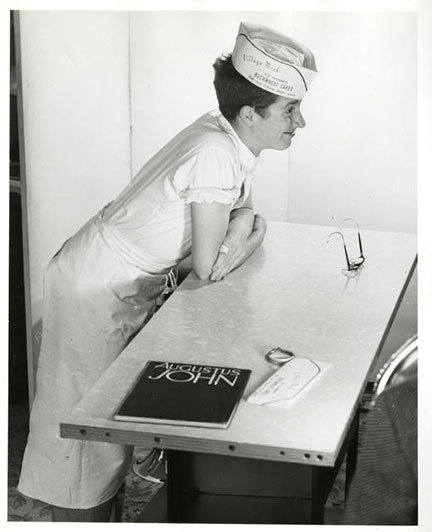 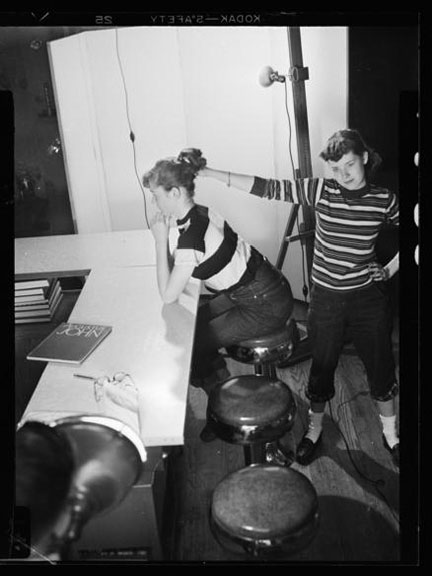 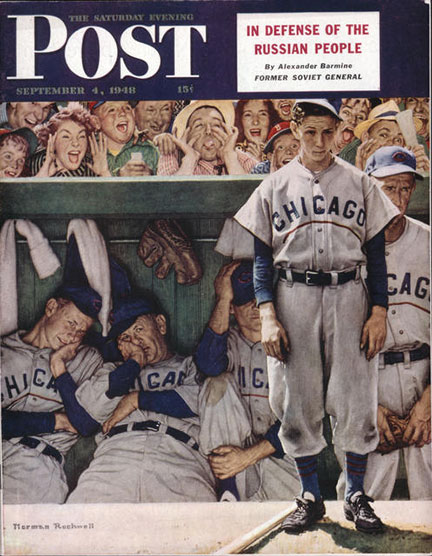 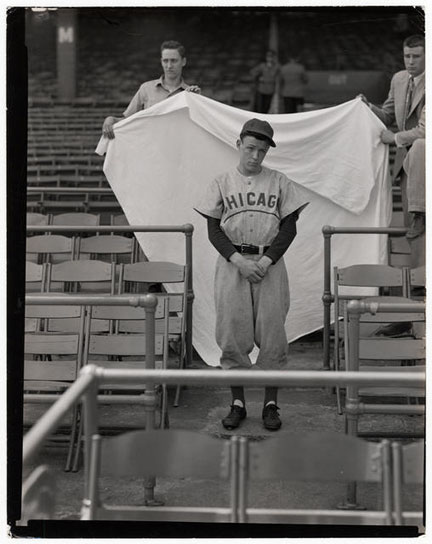 Of the painting below, originally made for The Saturday Evening Post but never published, it was said to be “a fitting metaphor for the artist’s own struggles with The Post as he weighed the end of their 47 year association.” 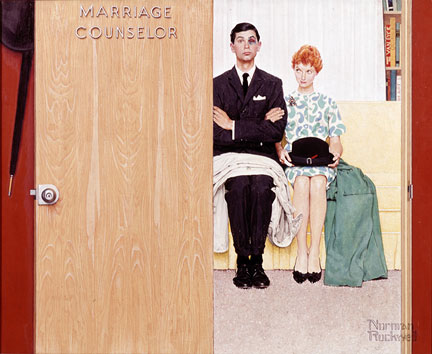 With a move to Look Magazine, Rockwell’s work traded away a bit of its cheeriness and humor and turned toward tackling the subjects of the day: Equal Rights, The War In Viet Nam, and Man’s Landing on the Moon.   Below is Rockwell’s 1967 painting New Kids In The Neighborhood and the photos from which he worked. 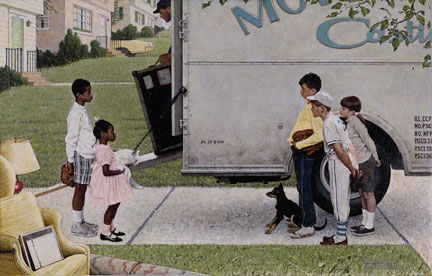 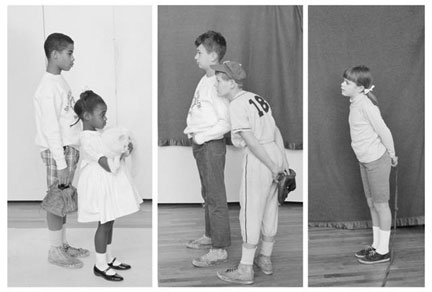 The painting below, titled The Problem We All Live With, seemed much more grittier when I saw it “in person”.  Though the images aren’t available,  the museum showed photo studies of the fisted hands of the Federal Marshalls, as well as studies of the tomato that had been thrown at the wall. 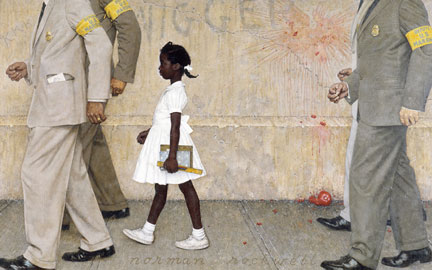 This exhibit, which runs through April 10th, begins as an inspiring example of one artist’s work.  But by the time you’ve walked through it, you’ve also traveled through half a century of American life, its wars, its politics, its new technology, and the drama and beauty of daily scenes and items which have long ago faded into history.

August 16, 1947 – LICENSE TO KILL – The Truth About The Shocking Official Negligence Behind The Growing Death Rate On Our Highways

May 23, 1953 – Humphrey – The Man Ike Trusts With The Cash and Case History of a Maniac Who Was TURNED LOOSE TO KILL.

I recommend this exhibit very highly.  Even if commercial illustration isn’t your thing, it is fascinating in and of itself just to see how the iconic paintings were composed and how they came to life.

There is so much going on at the Brooklyn Museum right now.  Later in the week I hope to find time to write about the Lorna Simpson exhibit and the Tipi exhibit.  (I also caught a glimpse of the “reOrder” exhibit, currently under construction, which promises to be amazing.)

Balopticon, a precursor to the overhead projector, used extensively by Rockwell

All photos courtesy of The Brooklyn Museum except for

Girl With A Black Eye – taken from here

The Channels Switch But It’s All Television

Grab – At the Movies – NMAI
This entry was posted in Brooklyn, Galleries and Museums, Karen and tagged A Day In The Life Of A Little Girl, Brooklyn Museum, Girl With A Black Eye, Maternity Waiting Room, New Kids In The Neighborhood, Norman Rockwell Behind The Camera, The Dugout, The Gossips, The Marriage Counselor, The Problem We All Live With, The Soda Jerk. Bookmark the permalink.