I don’t remember having ever seen a story ballet that took the audience behind the scenes of its characters’ stately homes.  Alexei Ratmansky’s Nutcracker opens in the kitchen, where the servants are putting the finishing touches on the dishes for the party and the children sneak inside to catch a glimpse of the feast.  I found this setting to be so endearing.  From the very beginning, it established the tone for what was to come.  This Nutcracker had any number of beautiful and heart warming moments and its characters seemed so genuine.  Inviting the audience in to the kitchen and letting us know that there’s a little problem with mice in the house seemed to break the ice and create an easygoing rapport from the very beginning.

One problem that I’ve had in the past with various Nutcrackers is that the Party Scene can sometimes seem interminable.  But because Ratmansky opens his Nutcracker with this very charming Kitchen Scene, the pacing of the Party Scene is perfect.  There is plenty to watch, the young guests are boisterous and exuberant, and there are a few sweet surprises. 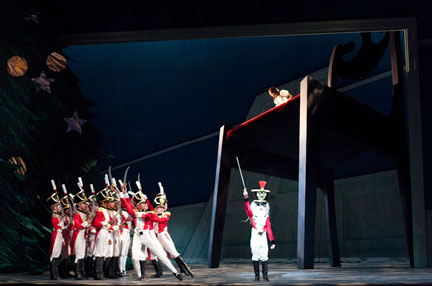 The design of the scenery (created by Richard Hudson) is ingenious.  Sets transform from Kitchen Scene to Party Scene to Battle Scene, to Snow Scene with such ease.   In the Battle Scene, the Christmas tree grows as if going right through the ceiling of the home, but in the blink of an eye, all the action is taking place at the foot of the tree as Clara watches from a chair above.  The audience is shown the chair from a perspective that leaves us feeling as if we are on the floor with the Mice and Soldiers too. 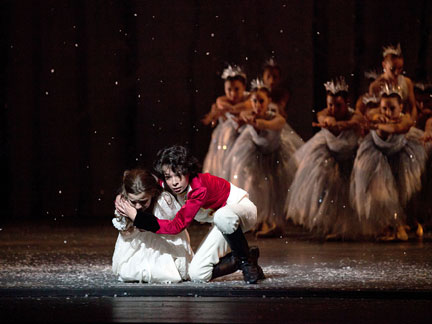 I loved the Snow Scene.  Snow is one of my favorite dances in all of classical ballet.  I’ve heard it said that if a person had gone their entire life without ever having seen a snow storm, then Tchaikovsky’s music could give them the experience.  Ratmansky’s Snowflakes weren’t just swirling beautifully; at times they became menacing as a blizzard.  In those moments, I felt as if the light was fading and night was closing in, bringing potential danger.   Especially beautiful was the way that the dance ended, with each ballerina laying on the stage on a diagonal, face up, her back arched.  As the final notes were played, each one released the arch and fell flat, in the same way that a snowflake has dimension while its riding on the wind and then falls flat on to the drift. 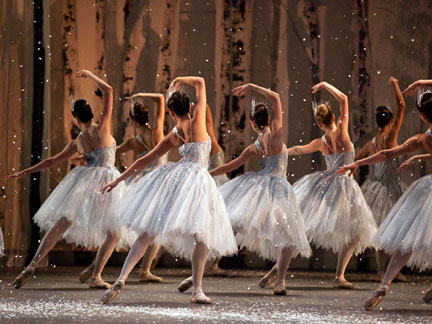 In Act II, Arabian was a crowd pleaser as four ladies vied for the attention of one shirtless man, who goes on to feel a bit of their wrath before the piece ends.  The Russians added a bit of slapstick interspersed with spectacular switch leaps and barrel turns. I was just knocked out by the Flowers.  Their beautiful costumes moved like big puffy carnations.  Early in the dance a row of ballerinas lower into arabesque penchee and their skirts seem to open up just like the petals of a flower.  The Flowers dance with Bees who alternately supply a few laughs and some dashing partnering.  The dance ends beautifully with each Flower, one by one, being lifted, thrown and caught by another Bee.

In the program Ratmansky speaks of his deliberate decision to minimize the role of the Sugar Plum Fairy, rather than making her the focus of the Second Act.  From beginning to end, his story focuses on Clara, the stages of her journey and her dreams of the future.  So rather than winding up the night with a Grand Pas De Deux danced by the Sugar Plum Fairy and her Cavalier, Young Clara and her Prince meet themselves as adults, played by Veronika Part and Marcelo Gomes.  In their Grand Pas De Deux, Clara the child is seeing herself as an adult.  Veronika Part transitions seamlessly between regal ballerina and playful little girl, often with the smallest childlike gesture.  In this dance, Ratmansky clearly chose to stay faithful to the story instead of going for big ballet flash.  In the lobby after the performance I overheard some audience members lamenting that the Grand Pas De Deux didn’t showcase the dancers’ strengths.  But to me, it seemed the perfect ending for the atmosphere created from the beginning of the ballet.  It was a heartwarming story told in faithful choreography.  And for those who needed a dose of bravura, Marcelo Gomes provided it with a stunning sequence of turns in his solo. 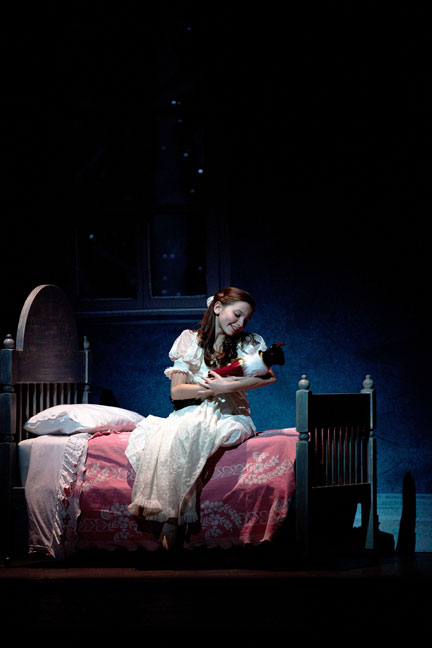 The children did a great job.  Kai Monroe (as Fritz) and Philip Perez (as The Nutcracker Boy) were especially charismatic and Athena Petrizzo (pictured above as Clara) delivered a very convincing performance, carrying a good deal of this production on her young shoulders.  From the opening notes, I was completely drawn in to the spirit of the story, and this is even after having sat through my fair share of Nutcrackers this season.  The choreography was full of good humor and a few tricks of the eye.  At times I was amazed by how much Ratmansky was able to convey with very simple understated movement.

It all made for a wonderful and memorable evening.  I loved this production.  It was well worth braving the New York City blizzard of 2010 to witness it.

All photos by Rosalie O’Connor